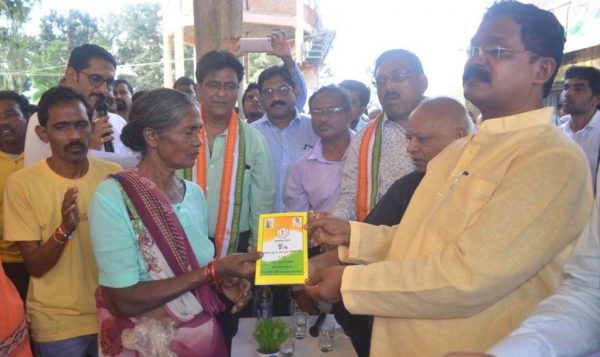 Universal Public Distribution Scheme is being implemented in Chhattisgarh state from October 2, 2019 i.e. the 150th birth anniversary of Mahatma Gandhi.

With this initiative of State Government, each every person of the state has access to ration card and ration. Now all the families of the state are eligible for ration card. Under Universal Public Distribution System, food grain entitlement of ‘priority’ ration card holders has been increased and ration is being allotted to them as per the revised entitlement from August 2019. With implementation of this scheme, priority ration card holding single member families are being provided 10 kg rice, two-member families are being provided 20 kgs of rice, 3-5 member families are being provided 35 kg rice and families with 5 or more members are being provided 7kg rice per member per month at the rate of Rs 1/kg.
Under the new PDS, families of general category (income tax payers and non-income tax payers) are also being provided food grains. On general category ration cards, rice is being allotted as following- 10 kg for 01-member family, 20 kg for 2-member family, 35 kg of food grains for 3 or more than 3-member family at the fixed rate of Rs. 10 per kg month. Presently, food grains are being provided to 9.39 lakh general ration card holder families.
After the implementation of universal PDS in the state, food security has been ensured to 97 percent of the population in the state. At present food grains are being distributed to 2 crore 48 lakh people registered under 67 lakh 10 thousand ration cards. During the last 2 years, about 11 lakh 15 thousand new ration cards have been issued in the state and the names of 5 lakh 52 thousand new members have been added to the ration cards.
The state government provisioned a huge amount of Rs 4,000 crore in the previous financial year 2019-20 to ensure food security for each and every household of the state. This year, provision of Rs 3409 crore has been made for the same.
To eradicate the problem of iron deficiency in people of Bastar division, 6 lakh 71 thousand Antyodaya, priority, Annapurna, single destitute and disabled ration card holders are being provided 02 kg jaggery at a discounted rate of Rs 17 per kg per month from January 2020, under the Public Distribution System.
State Government is providing rice to 43 thousand 640 beneficiaries through 471 registered institutions in the state at its own expense. Since October 2019, State Government has been supplying food grains to state-funded and private ashram-hostels as well as welfare institutions. It is to be noted that Government of India has discontinued the allocation of food grains for the funded and private ashram-hostels as well as for the welfare institutions from April 2019.
To meet the shortage of protein in the food of ‘Antyodaya’ and ‘priority’ category families in Scheduled Areas and Mada region of the state, 2 kg chickpeas are being distributed every month at the rate of Rs. 5 per kg. At present, about 25 lakh Antyodaya and priority ration card holders are being benefited.