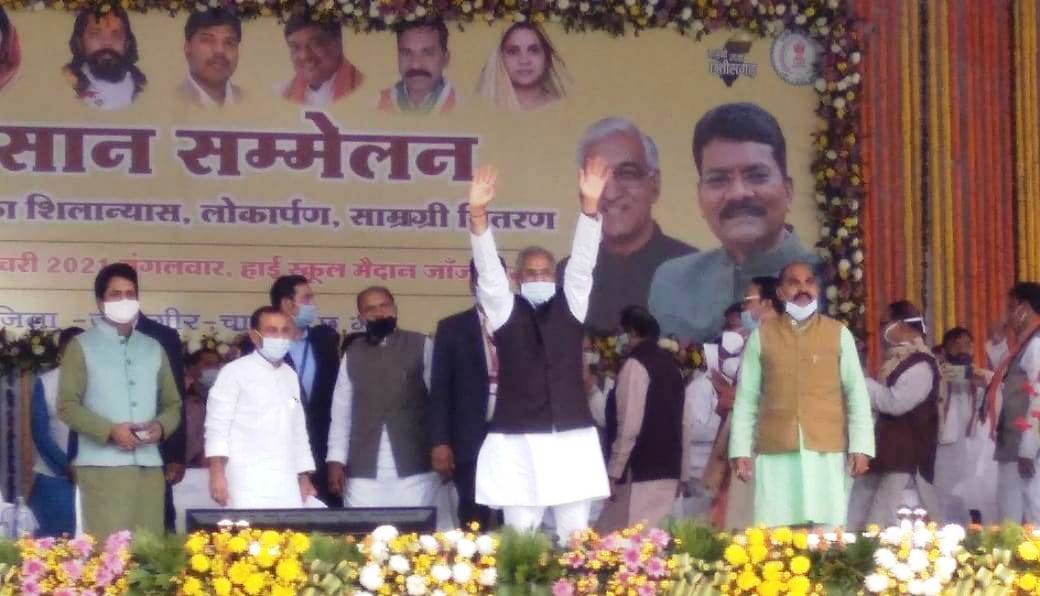 Goods and cheques worth Rs 1.12 crore distributed to 1051 beneficiaries

The next Government Medical College in Chhattisgarh will open in Janjgir-Champa district. Chief Minister Bhupesh Baghel made this announcement while addressing a huge gathering in a Kisan Sammelan held at the High School Ground of District Headquarters Janjgir on Jan 5.

Chief Minister Bhupesh Baghel reiterated his government’s promises made to farmers at the conference. Chief Minister said that the State Government is committed to provide fair price to the farmers. For this, in order to encourage cultivation of maize and sugarcane along with paddy under the Rajiv Gandhi Kisan Nyay Yojana, farmers are being given input assistance at the rate of Rs. 10,000 per acre. He said that the amount being given under the Rajiv Gandhi Nyaya Yojana is not given as a bonus to farmers for paddy production but as a tribute to their hard work. At the rate of 10 thousand rupees per acre, this amount will continue continuously.

The Chief Minister said that the Rajiv Gandhi Kisan Nyay Yojana has increased the enthusiasm of farmers towards agriculture. They have also become prosperous after receiving such big amount. It has also had its impact on the market. Only because of farmers and villagers, we have successfully faced the economic slowdown.

Chief Minister Baghel said that Chhattisgarh is a state with abundance of farmers and labourers. The strength of the state lies in their development. Baghel said that despite the tough challenge during the Corona period, we did not allow the pace of development to slow down. While many governments took other measures like MP funds and salary cuts, but we kept Chhattisgarh untouched by all these. All the development works including the 2 crore MLA funds are going on as before. To give speed to development works worth thousands of crores, we have decided to undertake intensive tour of districts. Chief Minister said that under the Rajiv Gandhi Kisan Nyay Yojana, we have provided funds to farmers at the appropriate time of farming and Teej-Tihar. Three installments have been given so far. The fourth installment will be distributed in the current financial year.

Baghel said that FCI has received permission to procure rice late this year. Generally, this permission is given at the beginning of the paddy purchase.

Chief Minister praised the farmers of Janjgir district and said that maximum paddy in Chhattisgarh is produced in this district. He said that due to the far-sightedness of our great forefathers like Minimata and Bisahudas Mahant, Janjgir is today one of the most irrigated districts of the state. The credit of extension of Hasdev Canal Project in Janjgir district goes to these politicians. Taking advantage of this, the farmers of the district are becoming prosperous.

Baghel said that Gothan will be made in all 11 thousand gram panchayats of the state. 7400 have been approved so far. Of these, the work of purchasing cow dung is being done in 4100 Gothans. These Gothans will not only be developed as resting place for cattle but also as a center of livelihood for local villagers.

Presiding over the program, Speaker of Chhattisgarh Legislative Assembly Charan Das Mahant welcomed the Chief Minister in his home district. He said that the Chief Minister is making intensive visits to all the districts to inspect the state on ground of Narva, Garwa, Ghurwa and Bari along with knowing the wellness of farmers and labourers. During this time, he talks to the officers cordially. This is a good initiative.

He said that due to the efforts of our forefathers, the maximum irrigation and canal network is spread in Janjgir district. More paddy arrivals have been estimated this year than last year’s 7.86 lakh metric tons.

He said that many youth from Janjgir district live in America and European countries. They are also hearing about the renaissance of Chhattisgarhi culture and Narva Garwa of Chhattisgarh.

Health and Family Welfare Minister and Janjgir District Incharge Minister TS Singhdev said that despite challenges, the State Government has made remarkable achievements in the last two years. Government has got first place in the implementation of many schemes. He said that the infection of corona has started decreasing now. He agreed to the demand of all the public representatives of the district to open a Medical College and assured to send the proposal to the Central Government with recommendations.