Scientists have used Machine learning to develop a design map of alloys at the nanoscale which can help predict the match of pairs of metals that can form bimetallic nanoalloys.

These nano alloys, also called core-shell nanocluster alloys, in which one metal forms the core and another stays on the surface as a shell, are a new frontier in the quest of scientists for new materials and have applications in biomedicine and other areas.

It is important to know under what conditions core-shell structures are formed in the nanocluster alloys and which metal forms the core, and which stays on the surface as a shell. A number of factors like cohesive energy difference, atomic radius difference, surface energy difference and electronegativity of the two atoms may play a part in the core and shell preference of the atoms.

The periodic table has 95 metals of different categories ranging from alkalis to alkaline earth, which can potentially form 4465 pairs. It is experimentally impossible to determine how they behave in forming nanocluster alloys. But computers can be programmed to predict the behaviour of these pairs and more through ‘machine learning’. The machine is taught to recognise patterns by feeding in a number of patterns with well-defined attributes. The more the data fed into the computer, the more accurate will be the recognition of an unknown data by the computer.

However, scientists faced a stumbling block here because of the limited number of experimentally synthesised binary nanoclusters with clear identification of the chemical ordering of constituents, and few core−shell combinations studied theoretically. Machine Learning could not be applied with confidence on small data set of sizes less than or around 100.

Researchers at the S N Bose Centre for Basic Sciences, an autonomous institute of the Department of Science and Technology, circumvented this problem by calculating the Surface-to-core relative energy on a variety of possible binary combinations of alkali metals, alkaline earth, basic metals, transition metals and p-block metals to create a large data-set of 903 binary combinations.

In their paper published in the Journal of Physical Chemistry, they investigated the key attributes driving the core−shell morphology using the statistical tool of machine learning applied on this large data set. Core-shell structures with lighter metals having lower atomic numbers in the core were classified as Type 1, and those having the heavier metals in the core were classified as Type 2. A number of attributes were built to characterise each data point in the set. The performance of the ML model was tallied with existing experimental data, and the ML model was proved to be reliable.

Having thus established confidence in the ML model, the dominant attributes driving the core-shell pattern were now analysed. It was found that the relative importance of the key factors depends on the subset combinations like alkali metal- alkaline earth, transition metal–transition metal etc. It was also found that if the difference in the cohesive energies between the two types of atoms is very small, the nanoclusters constitute a random mix of both the metals, and if the difference in the cohesive energies is very large, the atoms get segregated into a structure having two faces with one face of A atoms and another face of B atoms called the Janus structure named after two-faced Greek God.

Thus the attempt to connect ML with nanoscience was successful in tracing the mixing patterns of metal atoms in nanoclusters and formed a basis for the design map, which can help select the pairs of metals for nanocluster alloys. This design map developed by the scientists will be tested out in the nano laboratories at the Moscow State University and also at the S.N Bose Centre.

Another domain of study for the S.N Bose team has been the heterogeneous structure formed at the junction of two dissimilar semiconductors. They have established that using machine learning, hetero-structure types used in hetero-junctions of two semiconductors which are at the heart of devices like LEDs, solar cells and photovoltaic devices, can be predicted fairly accurately.

S.N Bose Centre has used machine learning to search for cheaper substitutes of naturally occurring rare earth material. Rare earth compounds with permanent magnetic properties are used in loudspeakers and computer hard drives. Of these, 17 elements of the periodic table like Neodymium, Lanthanum and so on are found sparsely on the earth’s crust, and their supply is monopolised by the countries where their mines happen to be located. By painstakingly creating a database of rare earth compounds and their attributes and then constructing a machine-learning model, they have predicted a list of potential candidates for permanent magnets whose cost will be less than $100 per Kg.

This work carried out through the ‘National Supercomputing Mission’ has added a whole new drive to humankind’s quest for new material. 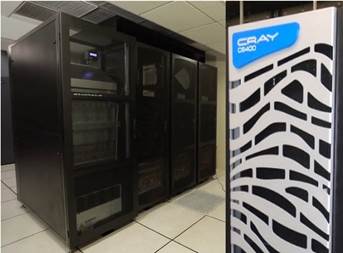