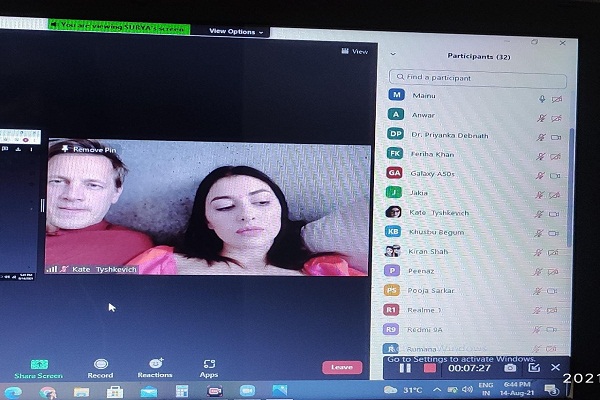 Sumedha Chaudhury
Ranchi, Aug 17
Touched by Indian culture Ekaterina Tyshkevich and Valentin Tomusyak, the lead TV actors of Zindagi channel’s Ukrainian series‘Snowdrop’ recently decided to meet three of their Indian fans namely Dr Anvesha Datta (Homoeopath), Surya Teja (IT professional) and Zia Poonam (Lawyer). Interestingly, pleased by the virtual interaction, the artistic couple is looking ahead of visiting the nation.
“Indian culture always fascinated me and that is the reason I remarried my husband according to Indian rituals after my own customary wedding,” said Tyshkevich. Meanwhile, Tomusyak said it is always a pleasure to learn about India.
The three youngsters who became friends through various social media communities on the ‘Snowdrop’ were following this couple for past three years which is notably an emotive family drama, adapted from the successful South Korean TV series Ice Adonis and was first serialized on TVN in 2015. It aired primetime in 2015 on TVN for 100 episodes of 45 minutes. Currently, it is shown on MX player with Hindi dubbing.
Datta who hails from Agartala said, “I couldn’t believe when the couple accepted our invitation over chat. Tyshkevich seems to be impressed by our culture for she was wearing Bindi during the online interaction held last weekend.
Rajahmundry resident Teja on the other side quoted, “Celebrities do share a common interest with fans across the globe irrespective of different countries and cultures.”
“It was a dream come true,” said, Poonam from Jorhat
The trio were joined by around 40 of their mutual friends across the nation.
Post interaction, Tyshkevich shared screenshots of the meet on her Instagram page and wrote ‘Thank you guys! You are so cute. Lots of Love to India’.
Datta informed that the couple was pleased by the discussion and has assured to visit India and meet them in person once the pandemic scenario turns to normal life.