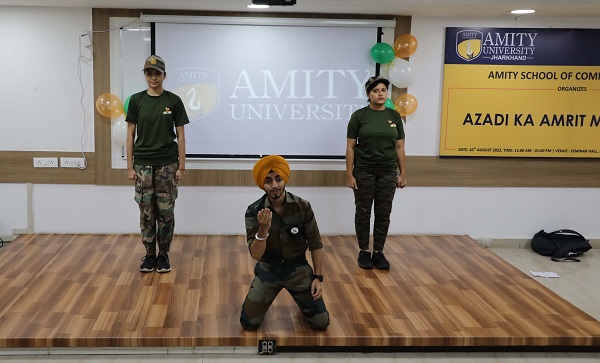 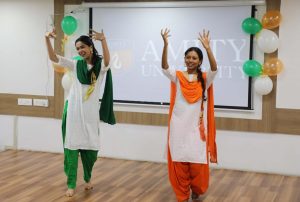 Lt Col Vineet Kumar said there should be take away for life from such an event. He spoke on nation-building and what exactly a nation is. “Every country has power and beauty. Hard power is the military mind. Soft power includes bollywood, science, and medical. He focused on Mission Olympic wing set up in 2003 to project soft power. Intellect and art give birth to science,” he quoted. The creation of beauty is essential. He spoke on an inner and outer conscious level. 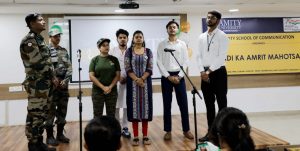 “Knowledge gives you freedom. Skills give freedom. Language is the thing that increases your freedom. Happiness is an underlying factor. One life is an amalgamation of all including personal, professional, social, and spiritual,” added the military officer.

Col Anjani Kumar (Retd) said wisdom comes from elderly people. He recalled his school days when India celebrated 25 years of independence. Encouraging the students, he said that if one door is closed, the other door opens. Youth power was appreciated. He recalled his school days in 1972, when India celebrated its 25th Independence Day. No amendment to marking the special day by the Government of India was passed then. Freedom comes at a cost, and we should contribute to it. He further spoke about the Agniveer scheme and the relevance of Yoga asanas. The utility of heartfulness was discussed in detail.

Dr Suman Dubey spoke on the unity of Indians during peak Covid phase in 2020 when Vande Bharat Mission’s flight was saved while landing in Kozhikode from Dubai. She suggested the students for self-evaluation by sitting with themselves through meditation for at least 24 minutes.

“There are hardware and software in the body. Respect your body,” she added.

Welcoming the audience, Prof. (Dr.) Raman Kumar Jha, Vice Chancellor, Amity University, Jharkhand said, “This is to salute the armed forces, people, and martyrs. There are aspects of freedom as well as non-freedom in our nation. There will be an evaluation at all levels. If we attain individual freedom every day is a Mahotsav.”