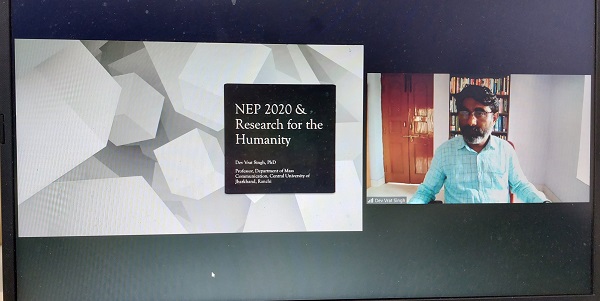 Addressing the participants, he gave a detailed presentation on ‘NEP 2020 & Research for the Humanity’ and referred to misinformation and disinformation. He suggested thorough research would tell us how to tackle it. “Both computer and media people are working on the dissemination of misinformation,” he quoted.

Explaining NEP, he mentioned that it is emphasizing all Indian languages including law as well as medical sciences. The government has started translating study materials into local languages.

Another advantage of NEP is the multi-disciplinary approach. Also, is the four plus one model i.e four years bachelors’ course. Interestingly, even after four years of graduation, a student can opt for Ph.D.

On how to use research for nation-building, he discussed the broad scenario of higher education in India. Presently, there are over 1000 universities and over 42,000 colleges, and as many as 12,000 standalone functioning in India.

About 25,000 Ph.Ds. are awarded every year in India which is comparatively less than in China. Job is a major attraction. Research and Development are major areas. In 2019, the Government of India made it mandatory to introduce a paper on Publication Ethics and Misconduct for the Ph.D. coursework. “UGC is continuously changing the rules and regulations or guidelines which is creating confusion. A long-term plan for around a decade would be helpful,” he suggested.

“At my department, we are constantly working on Indian Models and Theories of Communication as in most fields we teach western theory or model,” he informed.

“More evidence and data-based research are required. In this context whether your Ph.D. work is impacting society is quite relevant,” he said

Notably, referring to the Interdisciplinary approach, NEP mentions that we Indians should adopt a holistic approach.

“There is no debate on qualitative and quantitative approach and now we are speaking on mixed approach. Taylor and Francis as well as Elsevier are coming up in India, but India doesn’t have its own journal or research platform,” he stated.

He further focused on shodhganga website of UGC where around 3.6 lakh thesis is currently uploaded.

“Bigger question is how to cultivate research. Are we knowledge consumers or knowledge creators? Knowledge creation will be a bigger question in the future. In India, we have demographic dividend where youngsters are making half the population,” he spoke. Dr. Singh also mentioned the software for data tabulation and plagiarism.

Prof. (Dr.) Raman Kumar Jha, Vice-Chancellor, Amity University, Jharkhand appreciated the elaborated efforts of Dr. Dev Vrat Singh in NEP and how research is many times not oriented to social development directly. “Are we knowledge consumer or creator is a tagline I would like to take up from the programme. Prime Minister Narendra Modi has attended not less than 25 meetings for NEP, and is rigorously working on it,” he said.

He also stressed adapting the suggestions of NEP giving equal emphasis on various areas such as collaboration between two varsities.

Dr. S. Arvind Pandey, Director, Law, Amity University, Jharkhand said, “Research means to be inter-disciplinary and cross-referential so that the research output can reach as wide an audience as possible.”