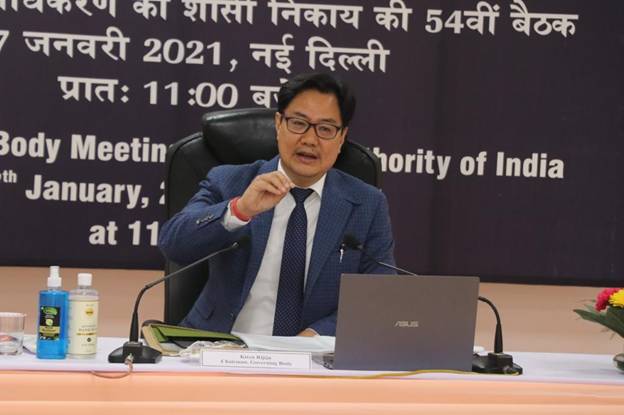 Delhi, Jan 29
The 54th Governing Body Meeting of the Sports Authority of India took place on Wednesday under the chairmanship of Sports Minister Kiren Rijiju. The focus of the meeting was on development of various aspects of National Centre of Excellence.

The key issues that were approved in the meeting were related to creating the highest standards across all National Centres of Excellence which included inter-alia the development and upgradation of infrastructure, management of hostels and Kitchen through an expert agency and provision of sports science equipment and manpower to various NCOEs. It was also decided to hire expert manpower to optimally operate National Centres of Excellence.

To ensure the highest quality of residential facilities and to ensure best athlete experience, it has been decided to outsource the management of hostel, mess and kitchen facilities to an expert agency at various SAI centres to bring the facilities at par with three star hotels. The pilot will be started with the newly-built hostels at Karni Singh Shooting Range and JLN complex.

To facilitate appointment of international athletes as coaches it has been decided to hire medal winners at international competitions to various cadres of coach directly on contract or deputation. The same rules apply for Dronacharya award winners. Sports Minister Kiren Rijiju said, “Our sportspersons are our national pride, this decision is in line with the earlier announcement that I had made about bringing eminent Indian coaches and ex-elite athletes to the SAI NCOEs.”

Also eminent coaches working in various Public Sector Undertakings (PSUs) and in the Government would be invited to join SAI on deputation for coaching. that this is in line with the earlier announcement made by him where he promised to bring eminent Indian coaches and ex-elite athletes to National Centres of Excellence in SAI.

To ensure young sportspersons have flexibility in order to do their academics and play sport at the same time, campus schools will be set up in SAI centers to cater to the educational need of the trainees. Also to ensure the best boarding and lodging facilities, it is necessary to develop hostels. For this end, the private/public sector will be engaged for the establishment of schools and serviced hostel facilities from the perspective of both efficiency in construction, operations and management and to ensure the impartment of world-class education through modern technology methods.

The Governing Body approved projects worth Rs. 100 crores (approximately) for building, development and upgradation of infrastructure at National Centres of Excellence across the country. These projects include construction of hostels and Bangalore and IG Stadium in Delhi along with creation of field of play and upgradation of various existing facilities.

Considering the role of sports science in development of an athlete, it was also decided to procure equipment of physiotherapy and hire physiotherapists and doctors for remaining NCOEs which could not be covered in the first phase.