“New Hospital will play a pivotal role in training doctors and providing good medical facilities to the people of Orissa”: Dr. Mansukh Mandaviya

“A long dream of establishing a medical college in Puri has been fulfilled today”: Naveen Patnaik

Expressing his elation at the event, Dr Mandaviya said that the hospital will play a pivotal role in training doctors and providing good medical facilities to the people of Orissa. He interacted with the students who will be part of the inaugural batch of the hospital and motivated them to work hard and serve in the remotest corners of the country so that healthcare can reach to the last mile. The Union Health Minister highlighted that the vision of New India as envisaged by the Hon’ble Prime Minister is to make healthcare accessible and affordable for all people. He further requested the Chief Minister to integrate Ayushman Bharat Yojana with the existing state health facilities to further improve the access to healthcare in India.

Shri Naveen Patnaik congratulated the students and informed them that 15% of seats in the hospital are reserved for students from government schools. He noted that “a long dream of establishing a medical college in Puri has been fulfilled today”. 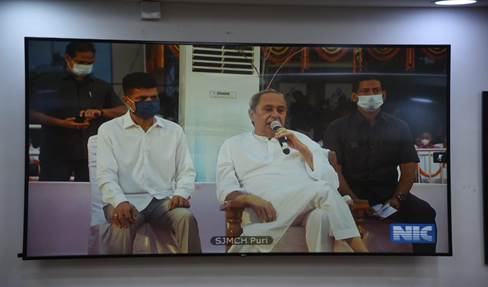 The SJMCH is part of 5 medical colleges built under Phase I of the scheme for ‘Establishment of new medical colleges attached with existing district/referral hospitals’. All the hospitals under the scheme have been built at an approved cost of 945 Cr with 60% of the contribution (567 Cr) coming from the Union Government. With the inauguration of the SJMCH, all 5 Medical Colleges have become functional now.

Overall, there has been a 55% increase in Medical Colleges in Orissa from 387 in 2013-14 to 596 in 2020-21. Under Phase II and III of the scheme for ‘Establishment of new medical colleges attached with existing district/referral hospitals’, two more hospitals in Jajpur and Kalahandi in Orissa has been approved and Central share of Rs 150 Crore and Rs 100 Crore respectively has been released to the State Government.