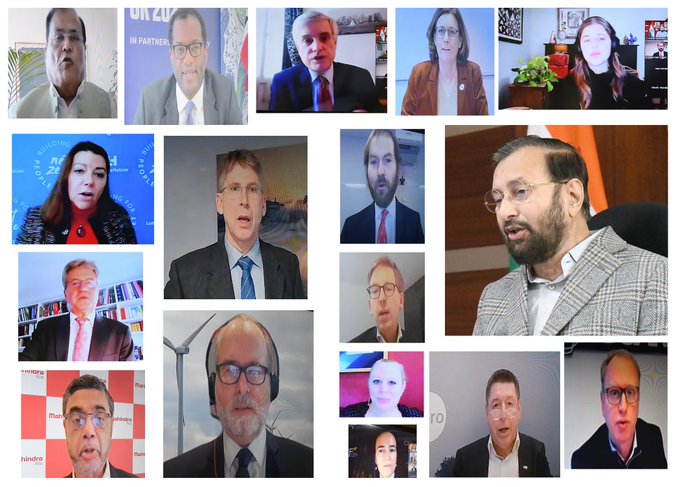 The Minister speaking at the high level segment of the Industry transition leadership summit pointed out that industry contributes directly around 30 percent of the global CO2 emissions, and transition of hard to abate industries towards low carbon pathways is key to combat climate change.

Javadekar informed that CO2 emissions have been cut down by top industries in the country voluntarily without any diktat and also renewable energy consumption is being actively promoted in the country by several companies.

“This is the way forward and we need to encourage voluntary participation of the industries towards cutting down carbon emissions.”, added the environment Minister.

Speaking on the issue of finance Javadekar said, funds should be mobilised at a larger scale and use of technology has to be there to deal with climate change issue.

He said affordable technologies and research studies need to be shared with developing countries so that they can work in the direction of saving environment.

Javadekar also highlighted that,countries must not forget that every Climate Action has a cost and if we consider Climate Change as a disaster, then nobody should profit from this disaster.The Minister said that this will be tantamount to a kind of double taxation on the poor of the developing countries, which is not Climate Justice.

Addressing the summit, Swedish Deputy Prime Minister Isabelle Levin said, India and Sweden have to work together to deal with climate change issue.She said, best practices and experiences need to be shared to cut down carbon emissions. The Swedish Deputy Prime Minister also pitched for mobilising the finances to deal with carbon emissions and said, the Government of Sweden is committed to work in this direction.

The event was organised by Leadership Group for Industry Transition (LeadIT). LeadIT is launched by India and Sweden along with the World Economic Forum with the support of Stockholm Environment Institute in 2019 during the United Nations Secretary General Climate Action Summit. Currently, the Group has membership of 13 countries and 15 companies, including Dalmia Cement, Mahindra Group and SpiceJet from India, committed towards low carbon industry transition.

The virtual event was attended by heads of global companies like Scania, FLSmidth, LKAB, LafargeHolcim, SSAB, Vattenfall, as well as Indian companies like Dalmia and Mahindra Group. The event also witnessed the participation of global think tanks and Ministers/representatives of countries like the UK, Luxembourg, EU and Germany.