The Vice President, Shri M. Venkaiah Naidu on Tuesday began the first ever visit by a high ranking Indian dignitary to Gabonese Republic with a series of high level meetings in the capital city of Libreville today.

In his first engagement today, Shri Naidu held a bilateral meeting with the Foreign Minister of Gabon, Mr. Michael Moussa Adamo and then met the President of Gabon, H.E Mr. Ali Bongo Ondimba.

Thereafter, he had a joint meeting with H.E. Mr. Faustin Boukoubi, President of National Assembly and H.E. Ms. Lucie Milebou Aubusson, President of the Senate. On this occasion, Shri Naidu emphasised the importance of shared values of democracy and pluralism in India-Gabon ties and gifted both presiding officers replicas of the original Indian Constitution.

The Vice President also led delegation level talks with the Gabonese Prime Minister, Ms. Rose Christiane Ossouka Raponda on a host of issues of common interest to both countries and sought to deepen the bilateral relations. During this, two MoUs were signed namely: establishment of a Joint Commission between the Governments of India and Gabon, and an MoU between the diplomats’ training institutes, Sushma Swaraj Institute of Foreign Services and Gabonese Ministry of Foreign Affairs. The Vice President, Shri Naidu and the Prime Minister of Gabon, Ms. Rose Chrisiane Ossouka Raponda witnessed the signing of these MoUs. 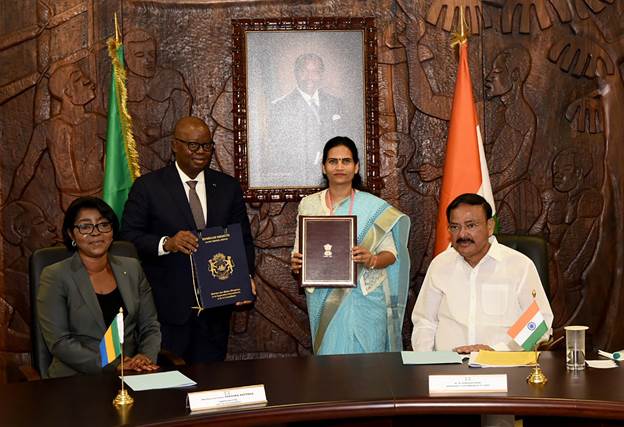 Signing of MoUs between India and Gabon in Libreville today

During his interactions with Gabonese leadership, the Vice President stressed that India attaches great importance to its relations with Gabon and reiterated the commitment of the Government of India to be Gabon’s reliable partner in its development journey.

“We are ready to work together with Gabon to expand our ambit of cooperation in various spheres to further strengthen and broaden our bilateral, regional and multilateral cooperation,” he said.

Referring to the steady growth of bilateral trade between India and Gabon, which crossed US$ 1 billion in 2021-22 despite the Covid-19 pandemic, Shri Naidu called for exploring the possibilities of diversifying our trade basket, particularly in the sectors of health and pharmaceuticals, energy, agriculture, Rice, defence, security, etc. He also wanted increased partnership between both the countries in key sectors such as oil & gas, mining, wood processing, defence, solar energy, etc.

Terming capacity building as an important pillar of India’s partnership with Africa, the Vice President announced the Indian government’s approval for a special training programme for the next batch of 20 Gabonese diplomats.

Congratulating Gabon for getting elected as a non-permanent member of UN Security Council for the term 2022-23, Shri Naidu thanked its leadership for supporting India’s candidature for the permanent membership of UNSC. Emphasising the need for structural reforms in United Nations particularly in the UN Security Council, he called for closer cooperation between the two countries on issues such as counter terrorism and climate change.

In his talks, the Vice President also reiterated India’s support to the Common African Position, enshrined in the Ezulwini Consensus and the Sirte Declaration, and underscored the need to rectify the historical injustice done to the African continent.

He also emphasised the need to work closely together in ensuring that the founding values and principles of NAM are adhered to in both letter and spirit, and that NAM focusses on mainstream contemporary issues of relevance to the developing world.

Recognising that Gabon was among the first countries to sign and ratify the International Solar Alliance agreement and that it plans to have 100% clean energy by 2030, Shri Naidu said that India would like to extend all possible assistance to Gabon to achieve its renewable energy targets.

Even though the Indian community in Gabon is relatively small in numbers, the Vice President lauded their valuable contribution to Gabonese economy and conveyed his appreciation to the Gabonese Government for taking good care of Indian nationals.