“Data from NFHS will be beneficial to all line ministries, State Govts and other stakeholders”: Union Health Secretary

The States and UTs which were surveyed in the Phase-II are Arunachal Pradesh, Chandigarh, Chhattisgarh, Haryana, Jharkhand, Madhya Pradesh, NCT of Delhi, Odisha, Puducherry, Punjab, Rajasthan, Tamil Nadu, Uttar Pradesh and Uttarakhand. The findings of NFHS-5 in respect of 22 States & UTs covered in Phase-I were released in December, 2020.

The main objective of successive rounds of the NFHS is to provide reliable and comparable data relating to health and family welfare and other emerging issues. The NFHS-5 survey work has been conducted in around 6.1 lakh sample households from 707 districts (as on March, 2017) of the country; covering724,115 women and 101,839 men to provide disaggregated estimates up to district-level. All the results of NFHS-5 are available in the public domain on the Ministry website (www.mohfw.gov.in).

The all-India and State/UT level factsheet released includes information on 131 key indicators. It provides information on important indicators which are helpful in tracking the progress of Sustainable Development Goals (SDGs) in the country. NFHS-4 (2015-16) estimates were used as baseline values for a large number of SDG indicators. Many indicators of NFHS-5 are similar to NFHS-4 carried out in 2015-16 to make possible comparisons over time. However, NFHS-5 includes some new focal areas, such as death registration, pre-school education,expanded domains of child immunization, components of micro-nutrients to children, menstrual hygiene, frequency of alcohol and tobacco use, additional components of non-communicable diseases (NCDs), expanded age ranges for measuring hypertension and diabetes among all aged 15 years and above, which will give requisite input for strengthening existing programmes and evolving new strategies for policy intervention.

The key results from India and Phase-II States/UTs NFHS-5 Factsheets areas below:

• The Total Fertility Rates (TFR), an average number of children per women has further declined from 2.2 to 2.0 at the national level and all 14 States/UT’s ranging from 1.4 in Chandigarh to 2.4 in Uttar Pradesh. All Phase-II States have achieved replacement level of fertility (2.1) except Madhya Pradesh, Rajasthan, Jharkhand and Uttar Pradesh.

• Unmet needs of family Planning have witnessed a significant decline from 13 per cent to 9 per cent at all-India level and in most of the Phase-II States/UTs. The unmet need for spacing which remained a major issue in India in the past has come down to less than 10 per cent in all the States except Jharkhand (12%), Arunachal Pradesh (13%) and Uttar Pradesh(13%).

On comparing NFHS-4 and NFHS-5 data, the increase in full immunization coverage is observed to be expeditious in many states and UTs; More than 50 per cent of Phase-II States/ UTs are sharing over 10 percentage points during the short span of 4 years. This can be attributed to the flagship initiative of Mission Indradhanush launched by the government since 2015.

• There is an increase from 51 per cent to 58 per cent of women receiving there commended four or more ANC visits byhealth providers at all-India level.

• Along with an increase in institutional births, there has also been a substantial increase in C-section deliveries in many States/UTs especially in private health facilities.

• Exclusive breastfeeding to children under age 6 months has shown an improvement in all-India level from 55 percent in 2015-16 to 64 per cent in 2019-21. All the phase-II States/UTs are also showing a considerable progress.

• Women’s empowerment indicators portray considerable improvement at all India level and across all the phase-II States/UTs. Significant progress has been recorded between NFHS-4 and NFHS-5 in regard to women operating bank accounts from 53 percent to 79 percent at all-India level. For instance,in the case of Madhya Pradesh the increase was to the tune of 37 percentage point from 37 per cent to 75 per cent. More than 70 per cent of women in every state and UTs in the second phase have operational bank accounts.

Member (Health), NITI Aayog, congratulated all the Health administrators on the wide expansion of insurance coverage which has been captured in NFHS-5. He espoused the view that the data from the survey would help the Government achieve Universal Health Coverage and stated, “NFHS-5 shows Momentum towards achieving SDG is getting further accelerated.”

The Union Health Secretary noted that with the widening scope of household questionnaire, the data generated from NFHS will be beneficial to all line ministries, State Govts and other stakeholders. He remarked that data of NFHS-5 does not fully capture the transformative interventions of Ayushman Bharat -Pradhan Mantri Jan Aarogya Yojana and Pradhan Mantri-Surakshit Matritva Abhiyan as they were being rolled out as households were being surveyed across the country. He also observed that inter-ministerial co-ordination is required between the ministries of Women and Child Development, Food, Rural Development and Panchayat affairs to tackle nutrition deficiency and Anaemia in the population as has been shown in the survey. 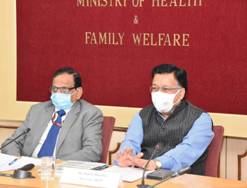 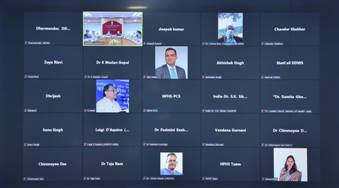 Exports of Gems and Jewellery more than double and rise to $ 23.62 bn in first 7 months this FY as compared to last...