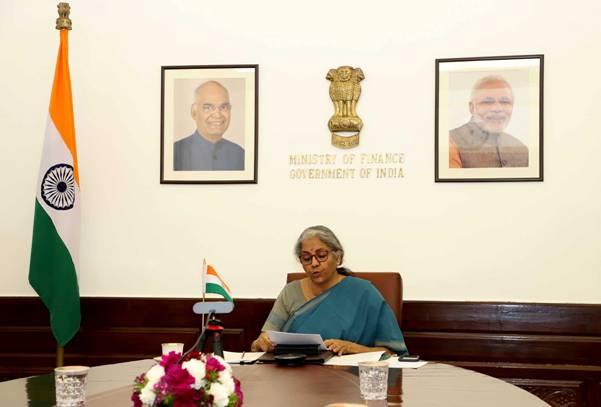 The G20 Finance Ministers and Central Bank Governors discussed Updates of the G20 Action Plan in response to COVID-19. They also discussed supporting the financing needs of the most vulnerable economies, the progress on the international taxation agenda, promoting greener transitions and the pandemic related financial regulation issues.

Sitharaman urged all G20 members to ensure equitable access and widespread distribution of vaccines. The Finance Minister shared that India is running an ambitious programme of rapid domestic vaccination and has emerged as a key global producer of vaccines and medical products, especially during the pandemic.

Sitharaman stated that India has covered over 87 million citizens in its vaccination drive so far and has supplied over 64 million doses to 84 countries, including 10 million doses as grant. The Finance Minister urged the G20 High Level Independent Panel on Financing the Global Commons for Pandemic Preparedness and Response to draw upon such country experiences.

Sitharaman reflected on the global growth projections and underlined the need for continued coordination amidst the persistence of uncertainties associated with the virus. The Finance Minister said that the G20 Action Plan has served as a good guidance tool and shaping recovery is the mainstay of its current update.

Noting the discourse in the G20 on climate change, Sitharaman emphasised on the need for progress on commitments made under the Paris Agreement on climate finance and technology transfer.

Sitharaman suggested that while channeling flows of international financial institutions into green transitions, it should also be recognised that the immediate challenge, particularly for developing and Low-Income Countries, is to restore growth. For boosting support to the most vulnerable economies, the Finance Minister supported extending the Debt Service Suspension Initiative, by six months, till December 2021.