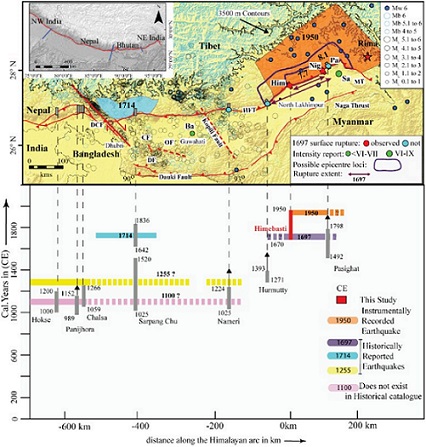 Delhi, Feb 9
Scientists have found the first geological evidence of an earthquake at Himebasti Village on the border of Assam and Arunachal Pradesh, documented by historians as Sadiya earthquake in history, which is recorded to have caused massive destruction in the region and almost destroyed the town in 1697 CE.

This finding could contribute to a seismic hazard map of the eastern Himalaya, which can facilitate construction and planning in the region.

Historical archives refer to often recurring earthquakes along the Eastern Himalaya for which geological evidence is lacking, raising the question of whether these events ruptured the surface or remained blind and how they contribute to the seismic budget of the region, which is home to millions of inhabitants.

Scientists from Wadia Institute of Himalayan Geology (WIHG), a research institute under the Department of Science and Technology (DST), Govt. of India, carried out a mega trench excavation at Himebasti village, Arunachal Pradesh, India, where the most recent event records the imprints of the 1697 Sadiya earthquake and analysed it with modern geological techniques.

They found the first geological surface rupture signatures in the form of exposed deposits associated with rivers and streams deformed by a thrust fault along a Northeast dipping fault zone. In order to constrain the causative faulting event at this site, the team dated twenty-one radiocarbon samples from the trench exposure.

They also found large tree trunks embedded in the youngest flood deposits at the exit of the Subansiri River (Sadiya town is located roughly 145 km southeast of Subansiri river), suggesting the post-seismic aggradation of the river following an array of aftershocks till six months in an abortive fashion. This work has been recently published in the journal ‘Scientific Report’.

The study of the earthquake at Sadiya standing on a grassy plain, almost surrounded by forested Eastern Himalayas on the right bank of Lohit River, adds an important site to the seismic hazard assessment of the eastern Himalaya, which will benefit the inhabitants and help in providing better infrastructure across the Eastern Himalayan foothills which is one of the most densely populated regions in the world.