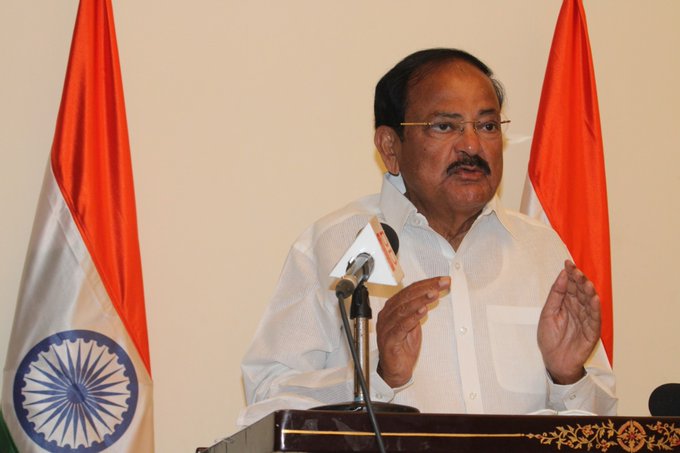 VP compliments the scientists who made indigenous Covid-19 vaccine possible

Delhi, Dec 26
Vice President M. Venkaiah Naidu on Dec 26 expressed happiness over the fact that India is on the verge of releasing its own indigenous COVID vaccine. He also complimented the hard-working scientists who have made this possible.

Addressing the concluding session of the India International Science Festival from Hyderabad through virtual mode, Naidu lauded the dedication of Indian scientists in making India self-reliant in the production of PPEs and Covid-19 testing kits. The Vice President said that India had negligible production capacity of PPEs, ventilators and testing kits at the beginning of the pandemic but within a short span we are now able to export PPEs.

Observing that false information on the nature of the coronavirus, medication and the vaccine has caused panic and anxiety among the people, Naidu said that this ‘infodemic’ also reinforces the importance of scientific temper in our lives. Emphasizing that a citizen who thinks critically will be immune to such misinformation or fake news, he called for promoting the spirit of inquiry. “It is not vaccines or drugs that can defeat the ‘infodemic’, but a rational outlook among people’, he said.

Calling science as the lifeline of human progress, the Vice President noted that science is about the spirit of rational inquiry that can guide us in our lives. Mentioning that our Constitution lists the development of scientific temper as one of our Fundamental Duties, he said that if we imbibe this temper, we can apply scientific methodology to every endeavour of life and make informed decisions.

“In our eternal search for truth, let us imbibe the rigour of a scientist, the wisdom of our ancestors, and the inquisitiveness of a child”, the Vice President added.

Referring to India’s rich background in science, Naidu emphasised that even in the field of science, India’s core philosophy has always been ‘share and care’ and ‘Vasudaiva Kutumbakam’. Mentioning that the famed scientist, JC Bose never filed a single patent despite the many inventions and discoveries he made, the Vice President said that it is in the same spirit that we have not only become the pharmaceutical hub of the world, but we have been extensively sharing these life-saving drugs with the rest of the developing world.

Regretting that most Indians are not even aware of our own rich history in science, Naidu called for celebrating our scientific achievements. He also called for encouraging children to take up careers in science and making India a world leader in scientific research.

Expressing the need to promote science education and inculcate the scientific temper from a young age, the Vice President said that children have an inherent curiosity and how we channelize that curiosity is very important. If we encourage them to ask questions and think critically, they will become confident, self-assured, and fearless for the rest of their lives, he said adding that ‘a confident generation means a confident nation!’

“Don’t push children to give answers. Instead nudge them to ask questions!”, he appealed to the parents and educators.

Calling for an end to rote learning, he said that students should be encouraged to ‘discover’ rather than be ‘told’. He expressed happiness over an exclusive event on toys and games in the science festival and said that games and puzzles are an important component to nurture inquisitiveness and kindle creativity in children. He called for more research by designers and child psychologists in this area.

The Vice President emphasized that an important lesson taught by this pandemic is that we need to invest and sustain R&D and strive to become self-reliant. Our space programme is a sterling example of how self-reliance can be achieved, he underlined.

He also called upon the private sector to partner with various institutes to promote innovation in the country to make India self-reliant in critical sectors like electronics and defence.

Drawing attention to the imminent fourth industrial revolution, Naidu expressed the need to capitalize on our demographic dividend, skill our youth, and ride this revolution to make our unique mark in the world of science.

On this occasion, Naidu emphasized the need for a holistic and inter-disciplinary approach in science education and called for making environmental sustainability an intrinsic part of scientific research. He also opined that science and technology should address the pressing needs of the common man. In the end, science is all about making people’s lives comfortable and happier, VP added.

Noting that December, 25th is the birth anniversary of former Prime Minister, Atal Bihari Vajpayee ji and Pt. Madan Mohan Malviya ji, the Vice President said that we must take inspiration from their lives. Wishing the people a Merry Christmas, he said that Christmas is the festival of peace & love, and the peace as the prerequisite of progress. “We all should work for peace”, Shri Naidu said and added that advancements in science are very useful in strengthening peace.

The Vice President appreciated the India International Science Festival for furthering the cause of science and scientific thought. He also complimented the organizers for successfully organizing the festival in a virtual format.

This year’s science festival was themed on – “Science for Self-Reliant India and Global Welfare” and was organized by CSIR and Vijnana Bharathi in coordination with various ministries.