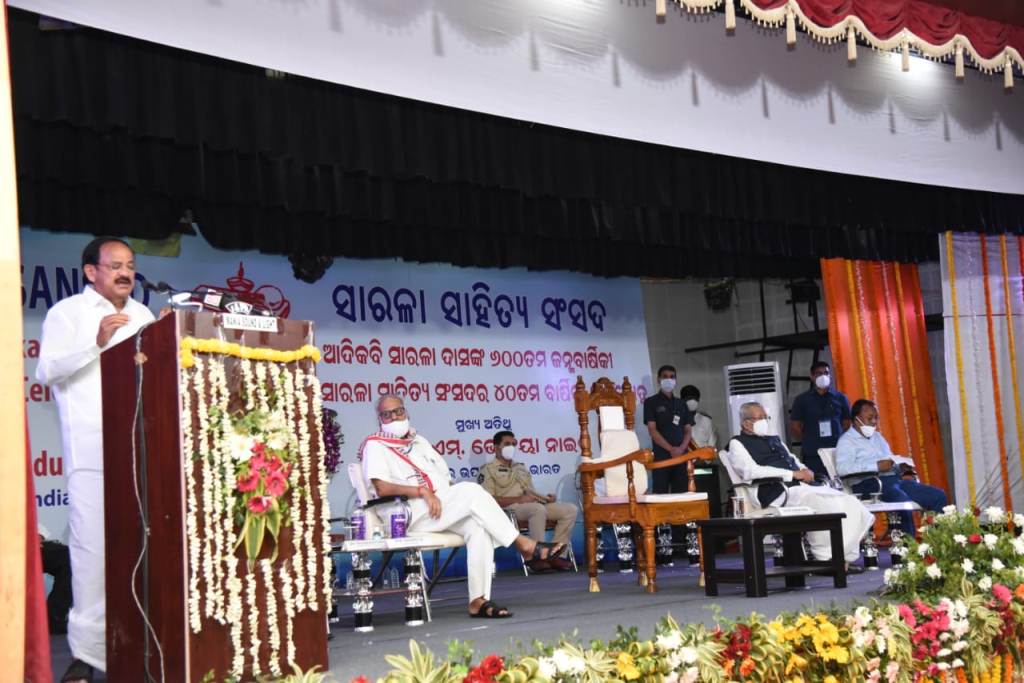 Naidu calls for increasing use of local languages in administration, judiciary and education

He underlined the importance of reading in the development of children’s personalities and to wean them away from excessive use of gadgets.

Naidu stressed that schools should make the fascinating world of books come alive in classrooms and called for more authors to write books for children. These books should be written and illustrated keeping in view the children’s varying interests and abilities, he said.

Speaking at the 600th birth anniversary event of Adikabi Sarala Das, the Vice President highlighted the fact that the Mahabharata written by Sarala Das has not dimmed among Odia people even after hundreds of years because of his unique style and diction.

Reflecting on this, Naidu said that this shows the importance of writing and communicating with the people in simple, colloquial language.

In this context, Naidu suggested the administration and the judiciary to use the local language increasingly to effectively communicate with people. He also called for the medium of instruction up to primary school to be in the mother tongue or local language. He also referred to studies that have shown the advantages of mother tongue in early schooling.

Hailing Sarala Das as not just Adi Kabi, but also as Adi Aitihasika and Adi Bhougolbith, Naidu said Sarala Das was a pioneer in democratizing literature as he had used colloquial language as early as the 15th century. Comparing Sarala Das with Kabir and Yogi Vemana, Naidu said that great poets have an extraordinary ability to communicate complex emotions and ideas in a simple language and leave a lasting impression on a wide cross-section of readers.

The Vice President also noted how Sarala Das’s characterization of heroes and heroines in his Mahabharata inspired many later authors to take a character or two and weave a full novel around them. Sarala’s women characters are strong and endowed with remarkable qualities of head and heart, and they act with great courage and confidence, he observed.

Hailing Sarala Das as a literary genius, who earned the title of ‘The Father of Odia Language’, he said that he has enriched Odia language and culture. “No wonder, Odia came to be recognized by the Government of India as a Classical Language of India with Sarala Das standing as a beacon’, he added.

On this occasion, Naidu complimented Biswa Bhushan Harchandan, Governor of Andhra Pradesh, for being conferred with the prestigious ‘Kalinga Ratna’. Earlier in the day, Naidu planted a sapling at the Raj Bhawan, Bhubaneswar.