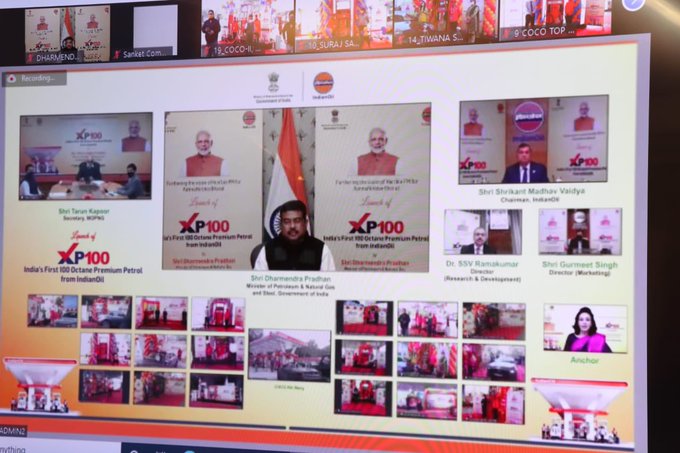 Government is committed to Ease of Living for the people of country: Pradhan

Delhi, Dec 2
In a move that can be a potential game-changer in the petroleum fuel retail market in India, Indian Oil has launched world-class premium grade Petrol (Octane 100) in the country on Dec 1.

Branded as XP100, the premium grade petrol was launched across ten cities by Dharmendra Pradhan, Minister of Petroleum & Natural Gas and Steel. Secretary, Ministry of Petroleum and Natural Gas Tarun Kapoor, Shrikant Madhav Vaidya, Chairman, Indian Oil, and other senior officials of the Ministry and Indian Oil were present in the virtual event.

Speaking on the occasion, Pradhan said that the technology for India’s first 100 Octane petrol has been indigenously created by Indian Oil R&D, and this is indeed a matter of pride. He said that this is yet another step in the direction of Atmanirbhar Bharat initiative which the Government is keenly implementing in energy sector, in line with our Prime Minister’s Energy Vision. The Minister said that the availability of XP100 puts India in an elite group of countries, having access to such high quality oil. It will provide high quality and power to the engine. The Minister said that Indian Oil has been a leader in development and adoption of technology. He said that the competition among the Indian PSUs has benefited the country and the people of India. He said that India has already adopted BS-VI category of fuel since April this year, and invested over Rs 30,000 crore in the technology.

Pradhan said that the launch of XP100 shows that the Government is committed to Ease of Living for the people of country.

Indian Oil plans to roll-out XP100 premium grade petrol in 15 identified cities across the country in two phases. In the first phase, it has been made available at select ROs w.e.f December 1, 2020, in Delhi, Gurgaon, Noida, Agra, Jaipur, Chandigarh, Ludhiana, Mumbai, Pune and Ahmedabad. In the second phase, the availability of this 100 Octane petrol would be extended to Chennai, Bangalore, Hyderabad, Kochi, and Kolkata. These cities have been selected basis their aspirational demographics and availability of high-end cars and bikes dealerships in these cities.

High-end premium vehicles equipped with the latest technology are fully geared to reap the full-throttle benefits of 100 Octane petrol. Worldwide, 100 Octane petrol has a niche market for luxury vehicles that demand high performance, and is available only in six countries like Germany, USA, etc.