“Buddha’s message is for the whole world, Buddha’s Dhamma is for humanity”: Prime Minister

“We have gathered today to not only celebrate the common heritage we inherited from Lord Buddha but also to build stronger and deeper bonds amongst our countries” : G. Kishan Reddy

Prime Minister Narendra Modi participated in an event marking the Buddhist Abhidhamma Day at the Mahaparinirvana Temple in Kushinagar on Oct 20. The programme was organised by the Union Culture Ministry in collaboration with International Buddhist Confederation and the state government of Uttar Pradesh. The AbhidhammaDay  marks the end of three month rainy retreat – Varshavaas or Vassa- for the Buddhist Monks and Nuns during which time they stay at one place in vihara and monastery and pray.

Addressing the event, the Prime Minister noted the auspicious occasion of Ashwin Poornima and the presence of holy relics of Lord Buddha which have been brought from Sri Lanka for the event. Welcoming the delegation of Sri Lanka, the Prime Minister recalled the connections between India and Sri Lanka and talked about emperor Ashoka’s son Mahendra and daughter Sanghamitra taking the message of Buddhism to Sri Lanka. He also remarked that it is believed that on this day, ‘Arhat Mahinda’ came back and told his father that Sri Lanka had accepted the Buddha’s message with so much energy. This news had increased the belief that Buddha’s message is for the whole world, Buddha’s Dhamma is for humanity, the Prime Minister said. 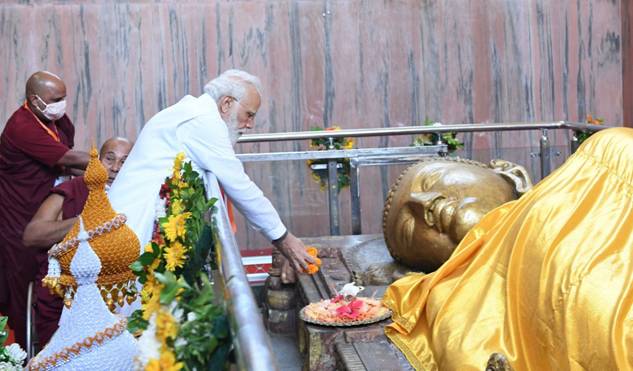 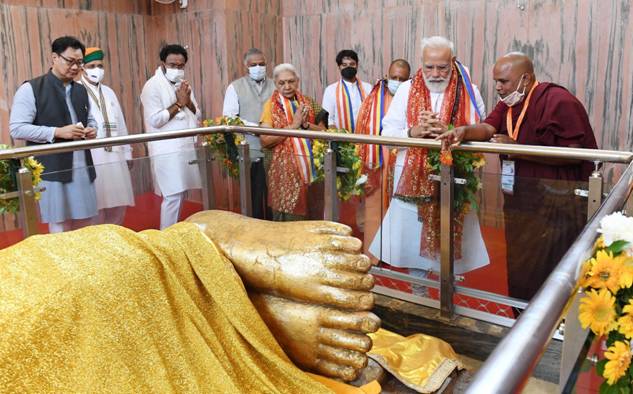 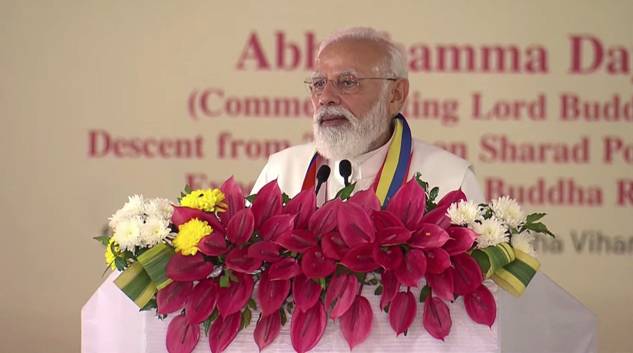 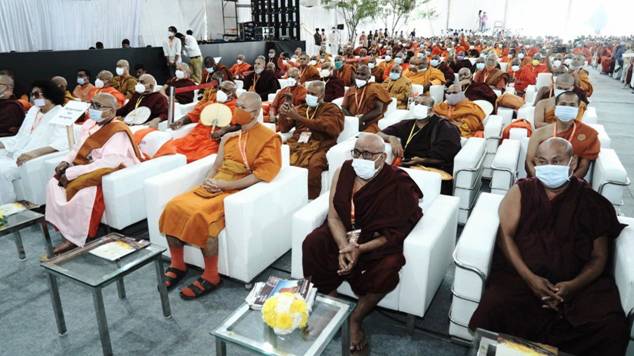 The Prime Minister said Buddha is universal because Buddha said to start from within. Buddha’s Buddhatva is a sense of ultimate responsibility. The Prime Minister said today when the world talks about environmental protection, expresses its concern about climate change, then many questions arise with it. But, if we adopt the message of Buddha, then instead of ‘who will do’, ‘what is to be done’ path starts showing itself. The Prime Minister said that Buddha resides in the soul of humanity and is connecting different cultures and countries. India has made this aspect of his teaching part of the journey of its growth. “India never believed in restricting the knowledge, great messages or the thoughts of great souls. Whatever was ours was shared with the entire humanity. That is why, human values like non-violence and compassion are settled in the heart of India so naturally”, the Prime Minister said.

Prior to participating in the event marking Abhidhamma Day at the Mahaparinirvana Temple in Kushinagar, the Prime Minister Shri Narendra Modi inaugurated Kushinagar International Airport today.

Addressing the gathering, at inauguration of Kushinagar International Airport today, the Prime Minister said that India is the centre of the faith of Buddhist community around the world. He termed the facility of Kushinagar International Airport, launched today as a tribute to their devotion. This region, the Prime Minister said, is witness to the entire journey from the enlightenment of Lord Buddha to Mahaparinirvana. Today this important region is getting directly connected to the world, he said.

Cabinet Minister of Sri Lanka Shri NamalRajapaksa in his address said that he feels honoured to have been a part of  the inaugural flight to Kushinagar from Srilanka and that he will cherish this honour for lifetime. He also said that Buddhism is the best gift that Sri Lanka has got from India.

Union Minister of Law and Justice Shri KirenRijiju in his address highlighted the fact that now Kushinagar is connected by all three modes –Air, Rail and Road,  andalso make it easier to travel to Lumbini which is the birthplace of Buddha. He also said that the demand of several years has been at last fulfilled.

During his address at the Mahaparinirvana temple and stupa Kushinagar Uttar Pradesh, the Union Minister G Kishan Reddy said, “I am grateful to head monk of Waskaduwa relics temple, Sri Lanka for bringing the relics to India. We have gathered today to not only celebrate the common heritage we inherited from Lord Buddha but also to build stronger and deeper bonds amongst our countries.” Talking about the efforts made by the Prime Minister Sri Narendra Modi he added, “Our Prime Minister has taken it as his dharma to strengthen India’s ties with Buddhist countries and the inauguration of the Kushinagar international airport is another step that will facilitate the travel of Buddhist monks and pilgrims around the world to visit this revered site associated with Lord Buddha”.

The Union Minister for Culture also quoted the Prime Minister who had on a previous occasion stated, “I see Lord Buddha in the 21st century across national borders, across faith systems, across political ideologies, playing the role of a bridge to promote understanding to counsel patience and to enlighten us.”

He added, “Buddhist pilgrims, historians and heritage enthusiasts can use this opportunity to not only visit Kushinagar but also discover other historically significant locations that are in close proximity such as Lumbini, Kapilavastu, Kesariya Stupa and Sravasti. The Ministry of Culture, Government of India is giving high priority for the development of Buddhist Tibetan institutes and the development of courses on Buddhism through various institutes. Such initiatives will bring all of us closer and the message of Lord Buddha will be reflected in our values and outlook”.

The Union Minister also highlighted the Buddhist circuit around Kushinagar, Sravasti, and Kapilvastu that was being developed as a part of the SWADESH Darshan scheme. He also spoke about several Buddhist circuit projects that were being undertaken in other parts of the country such as Madhya Pradesh, Bihar, Gujarat and Andhra Pradesh which are already nearing completion. The Minister also spoke about the high priority being given for for the development of courses on Buddhism through various specialised institutes in India such as the Central Universities of Tibetan Studies, Sarnath, the Central Institute of Buddhist Studies, Leh, the Nava NalandaMahaVihara, Nalanda, Bihar and the Central Institute of Himalayan Culture Studies, Arunachal Pradesh 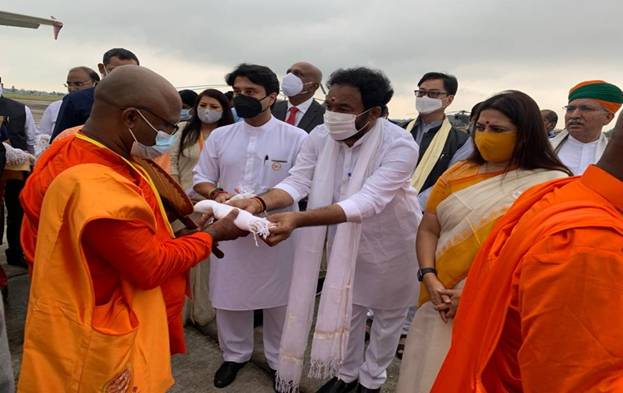 The Union Minister G Kishan Reddy also performed a ceremonial worship on the arrival of the Sacred Buddha relic from Sri Lanka on the occasion of Ashwin Poornima. He welcomed the Sri lankan delegation of over hundred Buddhists Monks and dignitaries including the 12 member Holy Relic entourage who brought the Holy Buddha Relics for exposition.

The delegation also comprised of Anunayakas (deputy heads) of all four Nikatas (orders) of Buddhism in Sri Lanka i.eAsgiriya, Amarapura, Ramanya, Malwatta as well as five ministers of the Government of Sri Lanka led by Cabinet Minister NamalRajapakshe.

The Kushinagar International Airport has been built at an estimated cost of Rs. 260 crores. It will facilitate domestic & international pilgrims to visit the Mahaparinirvanasthal of Lord Buddha and is an endeavour in connecting the Buddhist pilgrimage holy sites around the world. The airport will serve nearby districts of Uttar Pradesh and Bihar and is an important step in boosting the investment & employment opportunities in the region.

Exports of Gems and Jewellery more than double and rise to $ 23.62 bn in first 7 months this FY as compared to last...