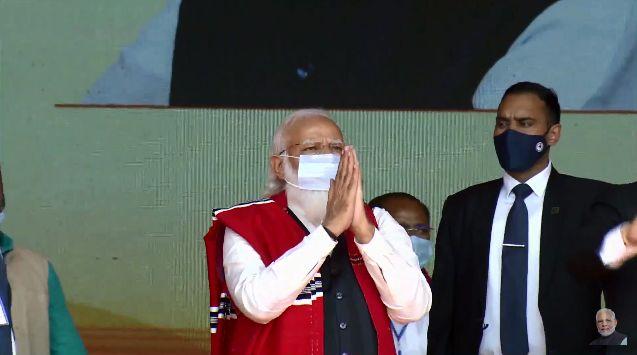 Addressing the public at the event, the Prime Minister said North East will be the new growth engine of India and he is inspired to work more for the people of Assam. He recalled how the North Bank in the Brahmaputra gave birth to Assamese cinema eight decades ago with the film Joymoti. He added this region has produced many personalities that enhanced the pride of Assam’s culture. He said the Centre and State Governments are working together for the balanced development of Assam and the major basis of this is the state’s infrastructure.

Criticizing the opposition, the Prime Minister said in spite of the great potential in the North Bank, the earlier governments gave the region a step-motherly treatment and did not prioritize the requirements of connectivity, hospitals, institutions of education, industries for this region. He added that the Government is working on the mantra of ‘Sabka Saath, Sabka Vikas and Sabka Vishwas’ and has overcome this discrimination. He further listed the infrastructure projects in Assam which were inaugurated by the Government.

The Prime Minister stressed the necessity for India to continuously become self-sufficient, to increase its strength and also its capabilities. He said over the years, the refining capacity in India has greatly increased, especially at the Bongaigaon Refinery.

He added the gas unit plant launched today is going to increase the capacity of LPG production and will make life easier for the people in Assam and Northeast. It will also increase employment opportunities for the youth in this region.

He said the Government has freed the poor sisters and daughters from the suffering they had to endure owing to the smoke from wood in their kitchens through the Ujjwala scheme. He said today, Gas connectivity in Assam has reached almost 100 percent. He highlighted that in the Union Budget this time, a provision has been made to provide free Ujjwala LPG connection to 1 crore poor sisters.

The Prime Minister said poor people suffer the most from the lack of gas connection, electricity connection and fertilizer. He said out of the 18,000 villages that did not have electricity even after seven decades of Independence, most of them were from Assam and the Northeast and the Government has worked on rectifying this.

He added several fertilizer industries in the region were either shut down or declared ill due to lack of gas, thereby adversely affecting the poor, needy and the middle class.

Shri modi said that under the Pradhan Mantri Urja Ganga Yojana, eastern India is being connected to one of the world’s largest gas pipeline networks.

The Prime Minister said a strong talent pool of our scientists, engineers and technicians plays a major role in giving impetus to a AatmaNirbhar Bharat. In the past years, we were working to create an environment in the country, where the youth of the country can solve the problems with start ups. Today, the whole world is recognizing India’s engineers. The youth of Assam have amazing potential. The state government is working hard to increase this capacity. Due to the efforts of the Government of Assam, today there are more than 20 engineering colleges in the state. Today, this position has been strengthened by the inauguration of Dhemaji Engineering College and the foundation stone of Sualkuchi Engineering College. He announced that the work on three more engineering colleges is going on. He said the Assam Government is trying to implement New Education Policy at the earliest. This will benefit the people of Assam, especially children of Tea Garden workers, Scheduled Tribes as the medium of education will be local language.

The Prime Minister said Assam is known world over for tea, handlooms and tourism. Self-Reliance will increase the strength and capabilities of the people of Assam. Tea production will strengthen the vision of a self-reliant Assam. He said in such a situation, when the youth here learn these skills in school and college itself, it will be of great benefit. He added in this year’s budget, a provision has been made to open hundreds of new Eklavya model schools in tribal areas, which will also benefit Assam.

The Prime Minister said the state and central government are working together for the farmers of Assam to increase their potential and their income. He said a major scheme of Rs 20000 crore has also been made for the farmers in the fisheries sector, which will also benefit the people of Assam. He added the government’s effort is that the produce of the farmers in Assam should reach the international market. He said that the North Bank’s Tea Gardens also plays a major role in Assam’s economy.

He lauded the Assam government for launching a campaign to lease land to small tea growers. He said now the need of the people in Assam is to strengthen the double engine of development and progress.