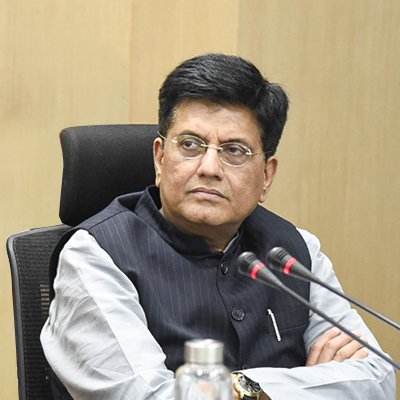 Invites businesses in the US to look at India as a manufacturing base;

Delhi, Feb 18
Minister of Commerce and Industry, Railways and Consumer Affairs and Food & Public Distribution Piyush Goyal on Feb 17 said that trade between India & the US has grown exponentially, but still there is a lot to be desired. Delivering the inaugural virtual address at the annual @USIBC State of US – India Business, he said that we had set a modest target of half a trillion dollar, which he hoped can be achieved through continuous engagement between the two nations.

Shri Goyal said that the US & India complement each other. He said that the US offers technology, finance & innovation, whereas India has a large market that needs to be served. He however added that at the same time, we need to protect people in agriculture, & protect the citizens from low quality products. Emphasizing at a fair dealing in our engagement, he said that India provides an under-served aspirational market. The minister said that the US will have to be very sensitive to price points in India, which matter to emerging economies with millions of people just coming out of poverty.

Inviting businesses in the US to look at India as a manufacturing base, Shri Goyal said that from here you can serve a large Indian market and at the same time, also serve global markets through cost-competitive products. He said that our reforms in defence, mining, labour and agriculture sector will open up new opportunities for the American companies. He mentioned about the announcement in the Union budget to increase the FDI limit in insurance to 74%.

The Minister said that he looks forward to re-kindle bilateral institutional mechanism for trade, the Trade Policy Forum, and commercial dialogue to deepen this relationship through continuous engagements. “As democracies wanting to give a better future to our people, we have a lot of synergy in our thinking. I am delighted to hear that the new administration has re-joined the Paris Agreement”, he added.

Shri Goyal said that we are keen to expand on the digital space with the US. He added that we would be conscious of our responsibility to the people of India for data privacy. “There are a lot of concerns with the big tech companies, and India would like to protect its policy space.”

The Minister said that India provides free healthcare to 500 million people, and this is the world’s largest free healthcare programme. He said that our health cost to our people has to be kept very affordable. Shri Goyal said that in some sense, India is already recognised as the ‘Pharmacy of the World’, as we provide a lot of generic medicines at affordable prices to large parts of the world. He also highlighted that the budget on healthcare has been increased very significantly and very large amounts of money will be invetsed on the ‘Jal Jeevan Mission’ over the next 4-5 years to provide clean drinking water to every home.