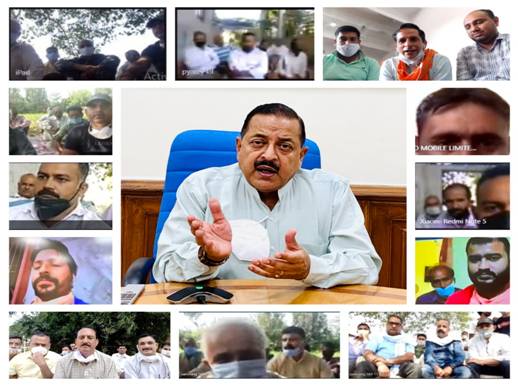 New agriculture reforms: During an interaction with farmers, Sarpanches, Panches and local activists of Panchayats falling under different blocks of district Ramban and Udhampur respectively, Dr Jitendra Singh said, the new farm legislation is a revolutionary new opening for the farming community, particularly for the farmers living in remote areas and border areas, who are faced with constraints of inaccessibility and lack of transport. The new arrangements will open up alternative options for them, he said.

Many of the farmers in the past, said Dr Jitendra Singh, stored their crop after harvesting and waited for some middle – man to pick it up and carry it to the market because they did not have sufficient means or resources for that.

However, he said, under the new arrangement, the farmer will be able to avail the option of arranging a buyer through different sources or even entering into a contract agreement for farming.
Contrary to the propaganda by the opposition parties that the Modi government is inclined to close down the existing Agricultural Produce and Livestock Market Committee (APMC) Centers and Mandies, Dr Jitendra Singh said, the matter of the fact is that the process of opening new centres is going on even today at different places depending upon the requirement and the demand. However, he said, the young educated and tech-savvy agriculturist of today cannot be tied down by the earlier arrangement and deserves the freedom to exercise his option.