Chief Justice (Retd.) Ramalingam Sudhakar exhorts use of Artificial Intelligence for speedier dispensing of justice and resolution under IBC

MCA Secretary commends NCLT for disposing off about 62,000 cases out of about 83,000 cases filed before it

The National Company Law Tribunal (NCLT) organized a national level Colloquium on the subject “NCLT- The Road Ahead”  here on Saturday. 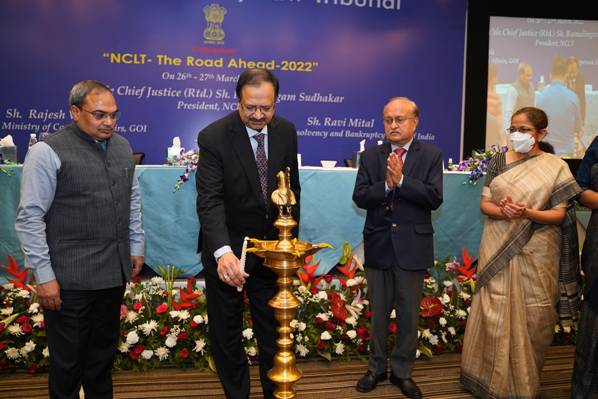 In his address as the chief guest, Chief Justice (Retd.) Ramalingam Sudhakar said that India is envisioning a multi-trillion dollar economy. Industry and commerce, crucial in the nation’s economy, are governed by Company Law besides other laws. Chief Justice (Retd.) Ramalingam Sudhakar stated that the Government has come out with [Insolvency & Bankruptcy Code (IBC)] code to resolve corporate issues to enable corporates of India to compete with the world. NCLT is the guardian of the corporate law and each of the Members has a role to play in the economic growth of the country. Today’s Colloquium will address effective and judicatious process and resolution, he stated.

In is address, Shri Rajesh Verma, Secretary, MCA, stated that NCLT is an institution of pride and it has led to faster resolution of corporate disputes under the Company Act and the IBC. Praising NCLT’s performance during COVID-19, Shri Verma said that NCLT disposed of about 62,000 cases out of about 83,000 cases filed before it.

Enumerating the various achievements of NCLT, Shri Verma said that these include rescue of creditors, providing an orderly exit for companies under distress, helping creditors realize the value of their assets and behavioral change in both Creditors and Debtors. The IBC has been key in releasing entrepreneurship from honest business failures, which is important as we have the 3rd largest startup ecosystem in the world, he said.

Shri Verma emphasized that the IBC Code has seen a roller coaster ride with six amendments have been made in the main legislation so far. Shri Verma further stated that many provisions of IBC have come out unscathed when challenged (in the higher courts) and the Supreme Court of India had settled the jurisprudence on various aspects of this new law at an unprecedented pace and passion.

Shri Verma suggested that to enhance the effectiveness of IBC, introduction of a cross border insolvency framework in the IBC is being considered. Leveraging technology and filling up posts are two key factors in increasing the speed, he said.

In his address to the gathering, Shri Mital, Chairman, IBBI, stated that there are two corner stones of the IBC viz timelines in process and the control being given to creditors as against Debtors. He stated that with more standardization, the speed of resolution of cases can be increased. Shri Mital said that IBBI is always ready to collaborate with NCLT in simplification of the process of resolution.

The Central Government constituted the National Company Law Tribunal (NCLT) under section 408 of the Companies Act, 2013 w.e.f. 01st June 2016. In the first phase the Ministry of Corporate Affairs set up 11 Benches, one Principal Bench at New Delhi and ten Benches in various locations in India. As on today, there are 15 benches spread across India which are manned by 48 Members who hear cases related to the Companies Act and the Insolvency and Bankrupcy Code 2016.

NCLT is a quasi-judicial authority incorporated for dealing with corporate disputes under the Companies Act. It is the adjudicating authority for insolvency resolution process of companies and limited liability partnerships under the Insolvency and Bankruptcy Code, 2016.

Out of a total of 83838 cases filed before National Company Law Tribunal since its inception, 62506 (75%) cases have been disposed off by the Tribunal as on Feb 2022. The cases disposed off comprises of 39446 cases under Companies Act and 23060 cases under Insolvency Bankruptcy Code, 2016. Even during Covid-19, NCLT kept its doors open and decided large number of cases.

The NCLT has been instrumental in effective implementation and success of the IBC for orderly growth of the corporate sector.