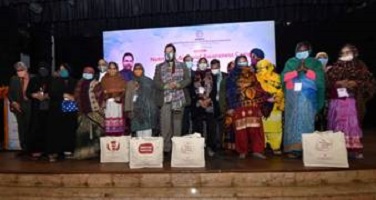 Delhi, Jan 29
Union Minister for Minority Affairs Mukhtar Abbas Naqvi on Jan 28 said here that the Government, the society and other organisations have worked united to turn a crisis into an opportunity.

While speaking at a “Nutrition and Covid Awareness Camp” organized by National Minorities Development & Finance Corporation (NMDFC) under CSR programme for the women from needy sections in New Delhi, Naqvi said that development of two “Made in India” Corona vaccines within a year of start of the pandemic, is a crystal clear manifestation of hard work of our scientists.

Women belonging to Self Help Groups (SHGs) who have worked with commitment to people’s health and well-being during the Corona pandemic were felicitated on the occasion. The beneficiaries comprised women working as domestic help, rag pickers, daily-wage earners etc. from the clusters of Jehangirpuri, Mukundpur, Bhalsawa, Shastri Park, Geeta Colony etc.

A kit-bag containing nutritional food, food supplements, masks, sanitizers, etc were distributed among the women SHGs in orderto spread the message that by consumption of day-to-day food and spices, available locally, can also strengthen immunity to fight against viruses.

Naqvi said that government’s effective measures have ensured that despite of huge population, India has been successful in containing the Corona pandemic to a great extent.

Naqvi said that during the Corona challenges, in an unprecedented measure, the Government provided- Free ration to more than 80 crore people; Free gas cylinders were given to more than 8 crore families; Rs 1500 have been given into bank accounts of 20 crore women; Rs 19,000 crore has been given under PM Kisan Samman Nidhi to more than 10 crore farmers.

“Aatmanirbhar Bharat” package worth Rs 20 lakh crore has been given to various sectors including Rs 1 lakh crore to agriculture sector. More than 60 lakh migrant labourers reached back to their home states during Corona pandemic through “Shramik Special Trains” and Rs 17,000 crore have been given to the states under State Disaster Relief Fund for providing assistance to migrant labourers.

Naqvi said that it’s a matter of pride for every Indian that the two Corona vaccines that have been given emergency use approval are “Made in India”.

Naqvi said that India has not only taken care of health and well-being of its people during the Corona crisis, it has also helped other countries by sending vaccines to these nations. The world’s largest vaccination programme is being going on in India. More than 20 lakh people of the country have been given Corona vaccines. About 3 crore people will be given Corona vaccines in the first two phases.

Naqvi said that pandemic peril has proved to be a positive period of “Care, Commitment and Confidence” for Indians, which has set an example for the entire humanity across the world.

Naqvi said that NMDFC has been spreading the message of improving nutrition and health awareness among the masses. NMDFC has earlier organized such an event at Kashipur, Uttarakhand for the women members of the handloom cluster. Further, NMDFC has also organized campaign to create awareness about Covid-19 prevention to thousands of artisans and 27 State Channelizing Agencies to further disseminate the message amongst their groups.