The Narendra Modi government has done away with around 1500 rules, like attestation and conducting interview

The Minister said that all the reforms are not only governance reforms but they are also huge social reforms which will give the coming generations a level-playing field. He said the intent of the Government became clear when soon after coming to power in May 2014, one of the first major decisions was to introduce self-attestation and do away with the practice of getting documents attested by gazetted officer.

Dr. Jitendra Singh said, since then the Modi government has done away with around 1500 rules, including abolishing interviews for recruitment. He said that the Ministry of Personnel has streamlined the governance and made it timeline-oriented. 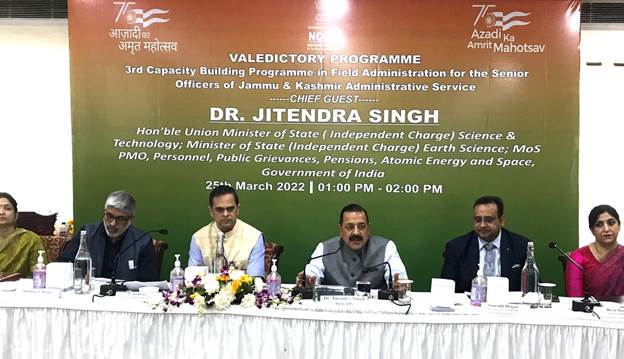 As for Jammu & Kashmir, Dr Jitendra Singh said, the cadre review had been pending for several years because the earlier governments were never keen about it. However, now the exercise has been undertaken to ensure regular induction of JKAS officers into IAS.

Dr Jitendra Singh said, J&K is still much deficient in the number of IAS officers compared to its approved total strength. This situation needs to be retrieved so that the civil servants remain motivated.

The Union Minister noted that earlier we were living in bliss of not having capacity but the fact is that the capacity and the potential were always there, but it is only now realising its utility since the work culture has changed in last 7-8 years under the present regime.

A total of 32 officers attended the programme from Union Territories of Jammu-Kashmir and Ladakh.