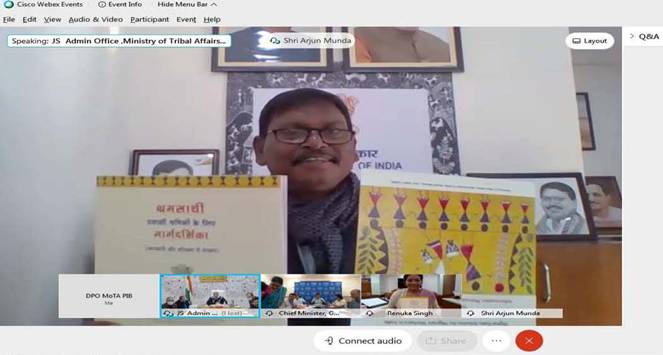 Delhi, Jan 23
The Union Minister of Tribal Affairs Shri Arjun Munda virtually through Video Conference launched “ShramShakti”, a National Migration Support Portal at a programme held at Panjim, Goa on Jan 22. It would effectively help in the smooth formulation of state and national level programs for migrant workers. He also launched a tribal migration cell, a tribal museum at Goa and “ShramSaathi”, a training manual for migrant workers.The Chief Minister of Goa Pramod Sawant also launched dedicated Migration cell in Goa to facilitate and support migrants who come from different States to Goa.

Speaking on the occasion, Shri Arjun Munda mentioned that the lack of real time data of migrants was the biggest challenge for state and national governments in formulating effective strategies and policy decisions for welfare of migrant workers at both source and destination states. “Migrants all over the country had to face after lockdown was announced due to the pandemic caused by corona virus.The migration of tribal population is distress-driven and the migrants are exposed to difficult and unsafe conditions. Sometimes they face trafficking or wages harassment issues including many occupational hazards at the work place,” he said.

He explained that the tribal migration repository, Shram Shakti would be able to successful able to address the data gap and empower migrant workers who generally migrate in search of employment and income generation. It would also help the government for linking the migrant population with existing Welfare Scheme- under Atam Nirbhar Bharat. The various data that will be recorded via Shram Shakti include demographic profile, livelihood options, skill mapping and migration pattern.

Shri Munda also launched the tribal training module- ShramSaathi, to ensure that the process of livelihood migration is safe and productive. “Tribal migrant workers often have low awareness about their rights and entitlements and ways to access services and social security in source and destination areas,” he said. He also stated that after training via this module, tribal migrant workers will be able to demand and access services, rights and entitlements related to livelihood and social security at their village before migration, as well after migration at destination towns and cities.