The Azadi ka Amrit Mahotsav: North East Festival being celebrated across all the eight northeastern states is being organized by the Union DoNER ministry with the spirit of “Hum Kisi Se Kam Nahi “from 28th April, 2022 to 4th May, 2022

The country is currently celebrating 75 years of its Independence, her glorious history, people, culture and achievements during the Azadi ka Amrit Mahotsav and DoNER ministry is highlighting the beauty of the north-eastern region and its achievements in various fields through this festival. Similar events, on varied themes, are being held in various capital cities of the eight northeast states under the ongoing festival. 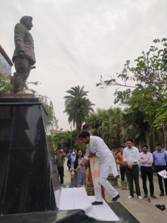 Shri G.Kishan Reddy reviewed various tourism projects at a meeting with officials of State and Central government, Loktak Development Authority and officials of various other departments at Sendra Park, in Moirang, today.

He also paid floral tributes to the statue of Netaji Subhash Chandra Bose at the INA Museum Complex at Moirang in Bishnupur District.