Preservation and promotion of our rural and indigenous games should be given top priority: M. Vankaiah Naidu

“Organization of the Games amidst the challenges of the pandemic epitomizes the determination and passion of New India. This youthful passion is driving India in every field with new momentum”: Prime Minister

Holistic approach and 100 percent dedication are the key requirements of success in sports and life : Narendra Modi

Speaking on the occasion, the Vice President , Shri M. Venkaiah Naidu  emphasised the need to encourage sporting activity upto village level, he called for developing the necessary sports infrastructure at the grassroots level, with concerted efforts of the centre, state and local bodies. Together, these will take the Indian sporting potential to new heights, he added. The Vice President also called for awarding some extra marks to sportspersons in college admissions and promotions in various departments. “Incentives like this will go a long way in encouraging the sports in the country,” he said. 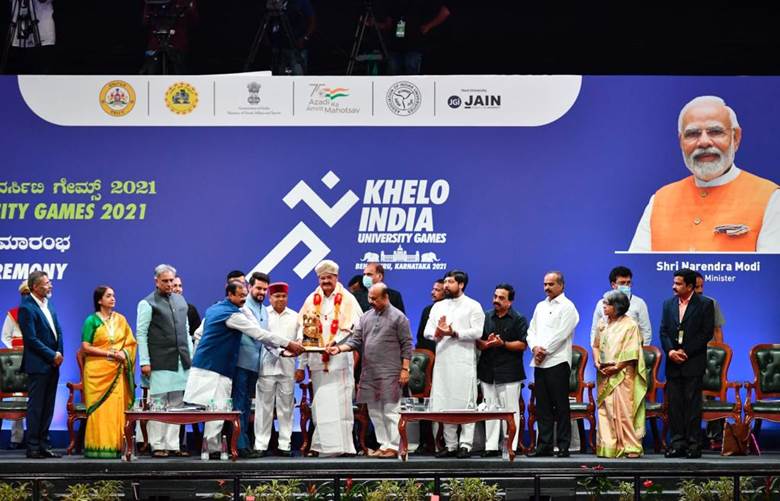 The Vice President gave a call to return to our roots and asked all stakeholders to give top priority to our indigenous and rural sports. He expressed happiness over the fact that this edition of Khelo India would feature 20 sports disciplines with indigenous sports like Yogasana and Mallakhamba introduced for the first time. “This is very important in order to preserve and promote our rural and indigenous games which are rooted in tradition and are a part of our cultural heritage,” he said In his message, the Prime Minister said that Bengaluru symbolizes the youthful enthusiasm of the country and is pride of the professionals. He said that it is significant that a confluence of startups and sports is happening here. “Holding of the Khelo India University Games in Bengaluru will add to the energy of this beautiful city.”, he said. The Prime Minister saluted the resolve of the organizers as organization of the Games amidst the challenges of the pandemic epitomizes their determination and passion. This youthful passion is driving New India in every field with new momentum, the Prime Minister added.

The Prime Minister underlined the importance of team spirit as the first mantra of success. “This team spirit we get to learn from sports. You will experience it directly in the Khelo India University Games. This team spirit also gives us a new way of looking at life”, the Prime Minister said. Similarly, holistic approach and 100 percent dedication are the key requirements of success in sports. Strengths and learnings from the sports field also takes one forward in life. “Sports, in real sense, is the genuine support system of life”, Shri Modi emphasized. The Prime Minister also drew similarities between sports and life with regards to various aspects such as passion, challenges, learning from defeat, integrity and ability to live in the moment. “Wearing the victory well and learning from defeat is an important art that we learn in the sports field”, he said. 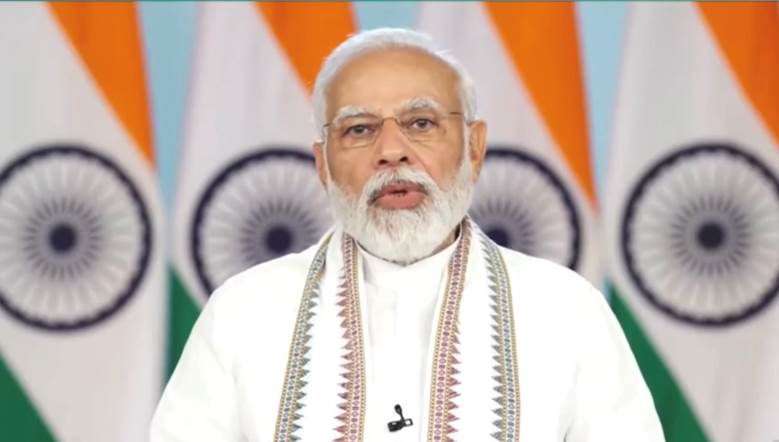 Welcoming nearly 4000 athletes to India’s tech capital Bengaluru, the Chief Minister of Karnataka Shri Basavaraj Bommai expressed, “It is our pleasure and privilege to host Khelo India University Games 2021 in Bengaluru. It adds to our pleasure that Hon’ble Vice-President of India, Shri Venkaiah Naidu, and  Hon’ble Union Minister Of Youth Affairs and Sports, Shri Anurag Thakur joined us at the Opening Ceremony of such an important tournament in Bengaluru. KIUG 2021 is a great opportunity for us to prove our hospitality and our dedication to maintaining the national integrity of our nation and culture. PM Narendra Modi has given the impetus and a new dimension to our sporting world with his mission of Khelo India.” 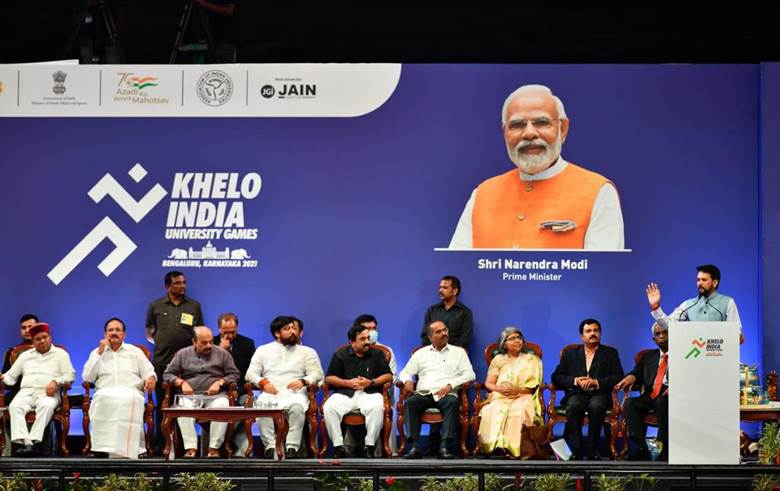 Union Minister Of Youth Affairs and Sports Shri Anurag Singh Thakur said, “When the first KIUG took place in Odisha, there was great pride and enthusiasm among people. But then, all our lives were affected by Covid and we had to wait nearly two years to return with Khelo India University Games 2021. After two years, it is the first opportunity for us to assemble together for the University Games and I see a similar passion among the youngsters this time around. With close to 4000 participants from nearly 200 Universities, this is the largest multi-discipline event taking place in the state of Karnataka. I visited the hosts, Jain University, and met over 500 enthusiastic athletes who will be taking part in the competition. I was also very happy to see that world-class facilities have been provided for the Games there, which are truly one of the best all-around in the world.”

While a line-up of cultural programmes such as dollu kunitha, a traditional folk dance enthralled the audience of 2500 attendees, a peppy dance ensemble for the Khelo India University Games Anthem composed by pop icon Chandan Shetty got the spectators tapping their feet to the catchy number.

High octane performances by drummers – Kerala Chande, Nashik Dhols & Punjabi dhols from across the country set the mood of the 10-day sporting event which has drawn participation from various parts of the nation. New addition to this year’s Khelo India University Games, Mallakhamba, a traditional sport dating back to the 12th century which showcases the skillset of youth in an indigenous manner, was also intricately displayed during the opening ceremony. This was followed by an amazing acrobatic performance by popular youth artists Kings United left the young audience wanting more.

A host of sports fans braved the tightened security to witness the opening ceremony on a giant screen erected outside the stadium.