The President and Supreme Commander of the armed forces of India, Shri Ram Nath Kovind reviewed the Indian Navy Fleet at Visakhapatnam on 21 Feb 22. With the theme ‘75 years in Service of the Nation,’ Indian Navy showcased its latest state-of-art indigenously built combat platforms during the 12th edition of the Fleet Review which was also conducted as part of the 75th anniversary of India’s Independence being celebrated as ‘Azadi Ka Amrit Mahotsav’.

After a 21-Gun Salute and Ceremonial Guard of Honour, the President embarked on the Presidential yacht, INS Sumitra, an indigenously built Naval Offshore Patrol Vessel designated as the Presidential yacht. The President was received by the Hon’ble Raksha Mantri Shri Rajnath Singh and Admiral R Hari Kumar, the Chief of Naval Staff. The Yacht sailed past 44 ships from the Navy, Coast Guard, SCI and MoES lined up in four columns at anchorage off Visakhapatnam, exhibiting the nation’s maritime power in full display. A spectacular flypast was conducted as a part of the static review of the Fleet. During the final stage of the review, a mobile column of warships and submarines carried out high-speed steam past alongside the Presidential yacht. Several enthralling waterfront activities by Parade of Sails, Search and Rescue Demonstration at Sea, Aerobatics by Hawk aircraft and Water Para Jumps by the elite Marine Commandos (MARCOS) held the guests mesmerised.

As the presidential yacht passed between the review columns, each ship dressed in full regalia, manned by her ship’s company saluted the President with traditional “Three Jais” in a demonstration of the unconditional allegiance to the country and the Supreme Commander.

Addressing the Fleet during the Review, the Hon’ble President said that the Indian Navy’s constant vigil, prompt response to incidents and untiring efforts have been highly successful in ensuring Safety of the seas and of the maritime commons which are critical to our trade and energy needs. The President expressed his happiness on the Indian Navy becoming increasingly self-reliant and being at the forefront of the ‘Make in India’ initiative. He noted that about 70 per cent of the contents of several warships and submarines under construction in various public and private shipyards across the country are indigenous. He said that it is a matter of great pride that India has built nuclear submarines and soon we would have our indigenously built aircraft carrier, ‘Vikrant’, joining the service. He added that the development of indigenous naval shipbuilding capabilities is an impressive contribution to the making of an ‘Aatmanirbhar Bharat’. (full transcript of the address by the Hon’ble President during the review is attached).

The Review was followed by the release of a special First Day Cover and a commemorative stamp by the Hon’ble President in the presence of Raksha Mantri Shri Rajnath Singh and Minister of State for Communication Shri Devusinh J Chauhan. 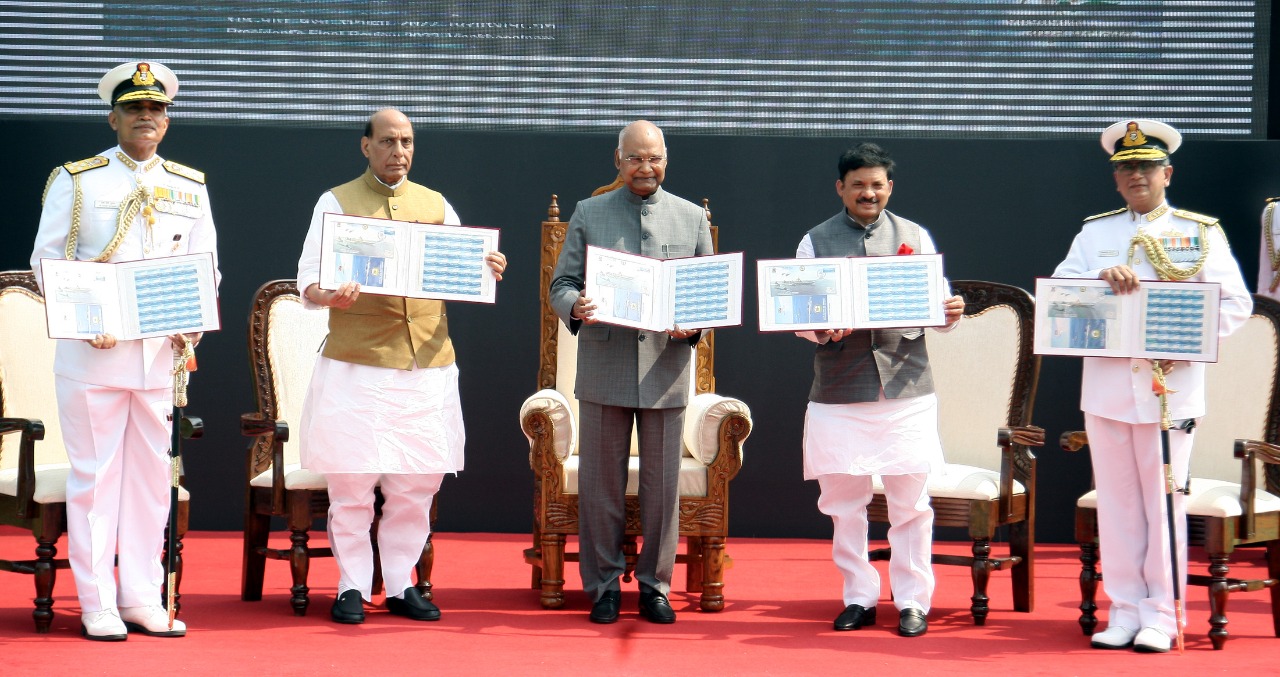