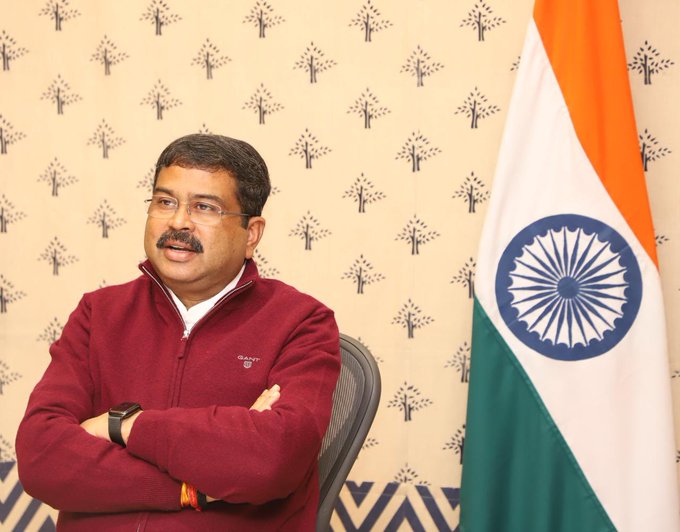 India is most committed to environmental and climate causes;

Delhi, Dec 24
Union Minister of Petroleum and Natural Gas & Steel Dharmendra Pradhan on Dec 23 interacted with Stanford Alumni Group on “The Future of Energy in India.” Pradhan said that India’s developmental stage engenders a rapid expansion of energy consumption and a need for robust energy security. India is currently using only 6% of the world’s primary energy while the per capita consumption of energy is still one-third of the global average. This, however, is rapidly changing. Recently released reports of many international platforms and agencieshave estimated that the world’s total primary energy demand would increase at less than 1% per annum till 2040. On the other hand, India’s energy demand would grow at about 3% per annum till 2040. Oil demand would plateau around 2030 for the world while the same would happen for India in 2035. Natural gas would increase its share in the world energy mix replacing oil and coal. This energy growth would be mainly supported by India and other countries in Asia, he added.

The Minister said that Prime Minister Shri Narendra Modi has clearly envisaged the measures for a cleaner, greener and more inclusive future for India. In this context, he said “We are accelerating our efforts to move towards a gas-based economy. We are moving rapidly towards cleaner use of fossil fuels, particularly petroleum and coal. A greater reliance is on domestic sources to drive biofuels. We are working towards achieving the renewables target of 450 GW by 2030,Increasing the contribution of electricity to de-carbonize mobility,Moving into the emerging fuels, including hydrogen, andEmphasising on digital innovation across energy systems.”

Shri Pradhan said that India took leadership in pledging to adapt energy efficiency and move towards green power, such as solar and wind. In last 6 years, India has increased the renewable power portfolio from 32 GW to almost 100 GW. We are on track to achieve our goal of 175 GW of renewable energy capacity by 2022 and have scaled our target to 450 GW of renewable energy capacity by 2030.Bio fuels is another area where we are vigorously working to tap its substantial potential to give us energy security, sustainability and also help the farming community. He mentioned about the success in reduction of Green House Gas emissions by 43 million tonnes annually by LED bulb distribution and LED Street Lighting National Programme.

Shri Pradhan said that in order to enhance energy availability and accessibility, we are working towards a “one – nation-one – gas-grid” structure through addition of approximately 17,000 kms of gas pipelines in the eastern and north-eastern parts of the country. Further, with the implementation of “City Gas Distribution” networks in all authorized areas, soon, more than 70% of India’s population will have access to clean and affordable natural gas. “We have pushed up the consumption levels of gas hard—as a result, we see rapid penetration and expansion of natural gas in the country. We believe that the proactive model that we have adopted is suited for India’s present development journey.”, he said.

Shri Pradhan said that India is most committed to environmental and climate causes with the massive renewable energy and the energy efficiency programs. “Overall, I would say that every country has to chart its own energy transition depending on the demand pattern and availability of resources. Although, we could have always argued on the back of per capita energy consumption basis that shows that India is not an emitter, like the OECD countries, however, India led by Hon’ble PM Modi, instead took the responsible path of sustainable development and energy transition for a clean and green future and the greatest common good for all.”

The Minister said that Oil marketing companies have started retailing BS–VIcompliant fuel since April 2020, which is equivalent of Euro VI fuel. This initiative is part of our efforts in curbing emissions in the road transport sector, which in turn will lead to better air quality for citizens across the country. He mentioned that India continues to endeavor to transform the hydrocarbon sector through proactive and far-reaching reforms in Exploration and Production, Refinery, Marketing, Natural Gas and Global Co-operation to enhance domestic production.

Describing India as an attractive investment destination for the energy sector, Shri Pradhan said that several policy reforms have enhanced the ease-of-doing-business. “A testament to the same is the projected investment of ~143 billion dollars in the Indian oil & gas sector, of which, ~ 56 billion dollars is in E&P, ~66 billion dollars in gas and ~20 billion dollars in refining. We are keen to partner with global companies and investors for further strengthening of energy infrastructure in the country. “

Talking about boosting rural economy, he mentioned about the waste-to-wealth generation under the Sustainable Alternative Towards Affordable Transportation (SATAT) initiatives. “We are setting up of 5000 compressed biogas (CBG) plants by 2024 with a production target of 15 MMT and an investment of about 20 billion dollars.”

Shri Pradhan said that ensuring access to clean cooking fuel has been at the core of Modi Govt development strategy for empowerment and ease of living. “In the last six years, LPG landscape has changed dramatically. LPG coverage in India has seen a remarkable surge from 55% in 2014 to now more than 98%. LPG in India through Pradhan Mantri UjjwalaYojana has become an instrument of ending energy poverty, social upliftment and a catalyst of social change. This blue flame revolution has unleashed a movement for women empowerment. The success of LPG has brought significant benefits in the lives of common citizens in the form of health of women and children, economic empowerment and cleaner environment.”

Speaking about energy security strategy, the Minister said that we have achieved the milestone of completely filling all the Strategic Petroleum Reserves this year with a total capacity of 5.33 MMT constructed at Visakhapatnam, Mangalore and Padur. “We have initiated the process of establishing another 6.5 MMT commercial-cum-strategic petroleum storage facilities at two locations at Chandikol and Padur under the Public Private Partnership model.”

On the India’s likelihood energy scenarioon the demand side, Shri Pradhan said that India’s energy demand would continue to grow. Increased demand would be curtailed by significant energy efficiency measures. Electricity consumption is expected to increase over the next 15 years. The carbon intensity of power generation would fall, driven by renewable gaining share relative to coal. Mobility would be redefined with increased penetration of EV; CNG & LNG-based vehicles in passenger and freight transport. Manifold increase in electricity demand from the residential sector due to rising income in rural & urban areas and also rapid urbanization;

Regarding the supply side, the minister envisioned that in the next 15 years, the energy mix will become more diverse & cleaner. Renewable energy, led by wind and solar power, is expected to become the fastest growing source of energy. Demand for crude oil is likely to continue to increase over the next 15 years due to rising energy demand.India may need to switch to cleaner plants with supercritical technology.The importance of bio-energy will increase. The use of hydrogen (blue and green) would increase.

Shri Pradhan said that Indian energy companies have developed a more strategic mindset by deploying latest technologies encompassed under Industrial Revolution 4.0. This new age of Industrialization offers great opportunities for the energy sector to exponentially improve its efficiencies and productivity by deploying next-generation digital tools. With the deployment of next-generation technologies, process plants can take decisions which are faster, reliable and cost effective. It is estimated that use of these technologies while improving productivity and efficiencies could result in cost reduction of primary energy by 20-25% by 2050. He also announced that major Indian energy companies – like their Western counter parts – have announced NET ZERO policy.