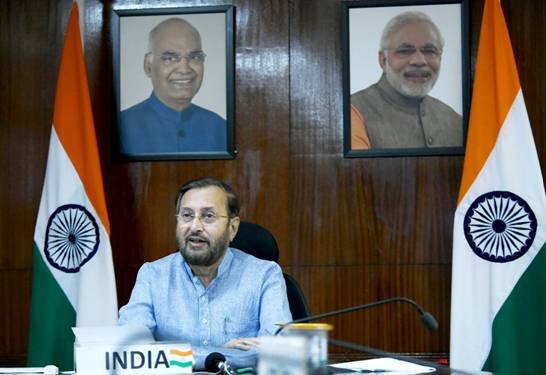 Delhi, Sept 17
The Environment Ministerial Meeting (EMM) of the G20 countries took place today through video conferencing under the Presidency of Kingdom of Saudi Arabia.

At the #G20 Environment meeting stated that the world has to channel its best practices to deal with #ClimateChange. India is committed to working with G20 nations for a better world and applauds the launch of the Global Initiative to Reduce #LandDegradation & #CoralReef program pic.twitter.com/79yj3BqUt7

G20 Environment Ministers Meet: Javadekar said, India is committed to work with G20 nations for a better world. He said, India is blessed with vast bio-diversity and ecosystem. The Minister said, India has been taking measures to enhance coral reef conservation. He noted that India’s steps towards dealing with climate change have been remarkable and stated that the world has to channel its best practices to deal with climate change and to get concrete results.

The Minister highlighted the efforts made by National Coastal Mission Programme under which government has taken many steps to protect and sustain coral reefs in the country. He also shared the efforts made by India towards achieving land degradation neutrality, and towards attainment of global goals of climate change mitigation and adaptation. He said India believes that Equity, Common but differentiated responsibilities, finance and technology partnerships are key pillars and India is walking the talk on Paris Agreement and its Climate commitments. India is taking adequate action to meet Paris Agreement goals and is one of the few countries compliant with it.

Javadekar applauded the launch of Global Initiative to reduce Land Degradation and Coral Reef program and two documents on climate change related to managing emissions and climate change adaptations under the G20 this year.

The Global Initiative on Reducing Land Degradation aims to strengthen the implementation of existing frameworks to prevent, halt, and reverse land degradation within G20 member states and globally, taking into account possible implications on the achievement of other SDGs and adhering to the principle of doing no harm.

The Global Coral Reef R&D Accelerator Platform is an innovative action-oriented initiative aimed at creating a global research and development (R&D) program to advance research, innovation and capacity building in all facets of coral reef conservation, restoration, and adaptation, and strengthen ongoing efforts and commitments made to enhance coral reefs conservation and their further degradation.