During the inauguration session, Shri Bandaru Dattatraya, Governor of Haryana in his address pointed out the importance of art and crafts in the development of civilization and culture. He also praised the Ministries of Central Government & State Government of Haryana for organising the Crafts Mela as this gives an opportunity to the artisan from India and as well as participating countries to present the rich legacy of arts & crafts of their respective countries. 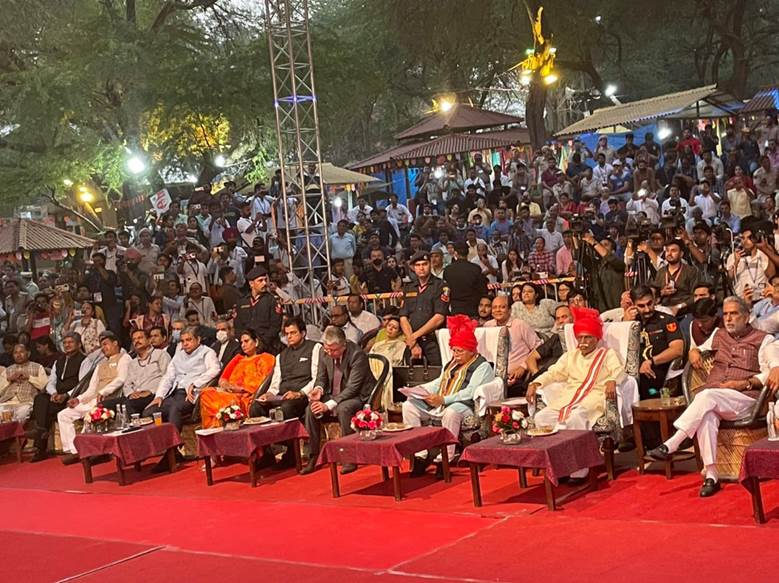 Chief Minister of Haryana Shri Manohar Lal stated that the Suraj Kund Crafts fair helps thousands of craftsperson from across India to showcase their arts and products to a wider audience. Thus, the Mela has also helped in reviving the heritage crafts of India. He further said that this years’ Suraj Kund Crafts Mela is special as organized when we are celebrating Azadi Ka Amrit Mahotsav. The Mela was first organized in 1987 and this is the 35th Crafts Mela organized this year and it is a stage not only for the artisans from Haryana but also from all over India giving opportunity to showcase their talent and encourages to preserve our rich heritage & culture. 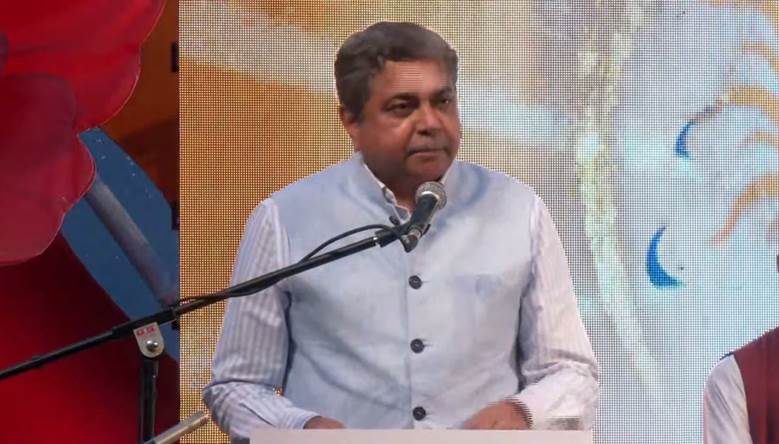 Secretary of Ministry of Tourism, Government of India Shri Arvind Singh while addressing at the Surajkund Crafts Mela , Faridabad, stated that the 35th  Surajkund International Crafts Mela-2022 is being held after  a long gap due to the Covid 19 pandemic which did not allow us to organise this much awaited crafts event in the year 2021. However, this year the Surajkund Mela comes with a promise of a bigger event with renewed energy’. He also praised the efforts & hard work of the Haryana Government for organising & implementing the Crafts Mela this year and stated that how it will help to boost the tourism in India.

Shri M.D. Sinha, Principal Secretary, Tourism, Government of Haryana stated the Mela ground is spread over 43.5 acres of land and houses 1183 work huts for crafts persons and a multi-cuisine Food Court, which is immensely popular with visitors. The ambiance of the mela will carry ethnic vibes with motifs and decorations such as Mahua, Nargis, Panchjanya and along with it the 75 years of independence theme with motifs and replicas of independence medals, Tri Coloured buntings and commemorative stamps. He further added that ‘the Surajkund Mela is now a tourist event with immense popularity overseas and we hope to make this event even more grand with new innovations in the coming editions’.

The Surajkund Crafts Mela was hosted for the first time in 1987 to showcase richness and diversity of the handicrafts, handlooms, and the cultural heritage of India. Jointly hosted by the Surajkund Mela Authority and Haryana Tourism in collaboration with the Union Ministries of Tourism, Textiles, Culture, External Affairs and Government of Haryana, this festival has come to occupy a place of pride and prominence on the international tourism calendar for its display of crafts, culture & cuisine of India in aesthetically created ambience. Keeping in pace with the times, online tickets are made available through portals like Paytm Insider, to help visitors easily enter mela premises without the hassles of long queues.  Special buses will run from various points to carry visitors from the surrounding areas to the fair site.

Jammu & Kashmir is the ‘Theme State’ of the 35th Surajkund International Crafts Mela 2022, which is showcasing its unique culture and rich heritage through various art forms and handicrafts from the state. Hundreds of  artists from Jammu & Kashmir will be performing different folk arts and dances. From traditional dances art forms to exquisite crafts, there is a bouquet of heritage and culture from Jammu & Kashmir to enthrall the audience.  Replicas of Vaishno Devi temple, Amar nath temple , Apna Ghar representing architecture from Kashmir,  live demonstration of House Boat and Commemorative  gate ‘Mubarak  Mandi – Jammu’     promises to be the main attractions of this year’s Mela.

A benchmark was set in the history of Surajkund Crafts Mela as it was upgraded to an international level in 2013. In 2020, more than 30 countries from Europe, Africa and Asia participated in the Mela. This year More than 30 countries will be a part of the Mela, which includes the Partner Nation – Uzbekistan. There will be enthusiastic participation from Latin American Countries, Afghanistan, Ethiopia, Eswatini, Mozambique, Tanzania, Zimbabwe, Uganda, Namibia, Sudan,  Nigeria, Equitorial Guinea, Senegal, Angola, Ghana, Thailand, Nepal, Sri Lanka, Iran, Maldives and many more.

To enliven the visitors’ mood, scintillating performances will be presented by international folk artistes from the participating foreign countries including Artists from across the States of India.

A variety of day performers will enthral the visitors like at the Bhangra from Punjab, Bihu from Assam, Barsana ki Holi, Lok Niritya From Haryana, Jamakda from Himachal Pradesh,  Lavni from Maharashtra, Live Demonstration of Hath Ki Chakki  and the ever famous Behrupiyas, who will keep the crowds entertained with their enchanting talent and showmanship within the Mela ground.

Enthralling evening cultural performances during the Mela fortnight will entertain the visitors to the hilt. Enjoy eclectic performances from bands like Rehmat-e-Nusrat, resonating Ghazals by Rinku Kalia, enthralling dance performances, soulful sufi performances, Rythms of India by Maati Baani , besides foot tapping dance & song shows of Jammu & Kashmir, Uzbekistan and other international artists. Catch all the action and excitement at the Chaupal from 7.00 pm onwards.

A family from Haryana is going to live in specially-created ‘Apna Ghar’ to showcase the authentic lifestyle of the state. ‘Apna Ghar’ gives a chance to the visitors to experience the lifestyle of the people of the state and provides them a chance to interact and learn about their culture. Apna ghar will show case traditional earthenware, utensils etc and craftsmen will give live demonstration of these traditional crafts.

Both Chaupals (amphitheatres) have been given a new look inspired by the elements of the participating state and partner nation to make the perfornaces come alive for the audience along with the use of traditional props.

⦁    Uzbekistan will participate as the partner nation for this year’s Mela.

⦁     Keeping pace with the Information Technology (IT) advancements, the Mela entry tickets can be booked online Through Paytm Insider

⦁     Renovated ‘Apna Ghar’ of Haryana will enthrall visitors in a new avatar.

⦁     A number of competitions to be organised for school students.

⦁    Exporters and Buyers Meet is organised during the Mela fortnight that offers a ready support system for craftspersons to access and tap the export market.

⦁   To beef up security arrangements more than 100 CCTV Cameras have been installed in the Mela ground along with the Night Vision Cameras. A large number of security personnel, including women guards, are deployed in the Mela premises to prevent the occurrence of any untoward incident or mishap.

⦁      Fire Brigade team and medical teams will be available for any emergency throughout the Mela.

⦁     Bank, dispensary, Mela police control room & CCTV control room are located at a centralized location so that visitors and participants can have easy access to these essential services.

⦁      A complete ban is imposed on the plastic/polythene bags within the Mela premises.

Surajkund, the site of popular Surajkund International Crafts Mela is located at a distance of 8 km from South Delhi in Faridabad. Surajkund derives its name from the ancient amphitheatre, meaning ‘lake of the sun’ constructed here in the 10th century by Raja SurajPal, one of the Tomar chieftains.  ‘Suraj’ means ‘Sun’ and ‘Kund’ means ‘pool/lake or reservoir’.  The place is built against the backdrop of the Aravalli Mountain range.

As the historians tell us, this area fell under the domain of the Tomar clan. Raja Suraj Pal, one of the chieftains of the clan of sun worshipers, had a sun pool built in this area. It is believed that a temple also stood in its periphery. Archaeological excavations have revealed existence of a Sun temple here based on ruins that can be seen even now. During the Tughlaq dynasty rule of FerozHYPERLINK “http://en.wikipedia.org/wiki/Feroz_Shah_Tughlaq” Shah Tughlaq (1351–88), the reservoir was refurbished by rebuilding the steps and terraces with stones in lime mortar.

The Mela is indeed a tribute to the richness and diversity of the cultural heritage of India, organised in the backdrop of this magnificent monument.