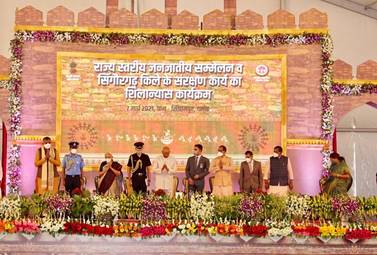 Delhi, Mar 8
The President of India Ram Nath Kovind laid the foundation stone for the conservation works of Singorgarh Fort in Singrampur village of Damoh district in Madhya Pradesh on Mar 7. The President also inaugurated the newly carved Jabalpur Circle of Archaeological Survey of India. He also addressed the State Level Tribal Conference at Singrampur village in Damoh. The program was organized by the Ministry of Culture, Government of India and the Tribal Affairs Department of Madhya Pradesh.

Kovind paid floral tributes at the statue of Rani Durgavati in Singrampur village. A video film showcasing the historical heritage of Singrampur was also screened during the program. Along with this, the students of Eklavya Vidyalaya performed cultural program on the heroic story of Rani Durgavati. The performance of classical singer Sonak Chattopadhyay captivated everyone. On this occasion, the booklet of Tribal Department was released and the portal for virtual classes for tribal artists was also launched by the President. Apart from this, the talented tribal students were awarded the Shankar Shah and Rani Durgavati awards by the President.

Addressing the audience, the President said that the welfare and development of the tribal community is inter-linked to the welfare and development of the entire country. He further observed that it was with this thinking that the central and state governments are implementing various schemes for the economic and social development of the tribal population. He said that we should work together so that our tribal brothers-sisters get the benefit of modern development without losing their tribal identity. He was happy to note that special emphasis is being laid on construction and operation of Eklavya Model Residential Schools in Madhya Pradesh. For the promotion of literacy and education among tribal girl students, priority is being given to the construction of girls’ education campuses in Madhya Pradesh.

The Union Minister of State (Independent Charge) for Culture and Tourism thanked the President for inauguration of the conservation program of the Singorgarh Fort. It has become an historic day because this has kicked of openings and opportunities of development in the area, the Minister explained. He said that there is no parallel to the talent of people belonging to the tribal community and we have to work together to bring back our historical glory.

Thousands of people from far and wide attended this grand event in which women and children also participated in large numbers. They enjoyed the delightful performances during the cultural programs.