India’s Minister for Science & Technology Dr Jitendra Singh, who chaired the 9th BRICS Science & Technology Ministers meet held today, has called for working towards rightful place for BRICS (Brazil, Russia, India, China, and South Africa) in the Global Innovation Index and this, he said, can be achieved through further strengthening the cooperation in the field of Science, Technology and Innovation (STI).

Dr Jitendra Singh said that BRICS countries must come together and innovate cost effective, affordable, accessible, sustainable and scalable scientific solutions, as they face many similar and unique challenges. He said, BRICS is home to 41% of the world population with an increasing share of this consisting of youth and added that the potential exhibited by the young scientists must get its rightful place in the global arena. 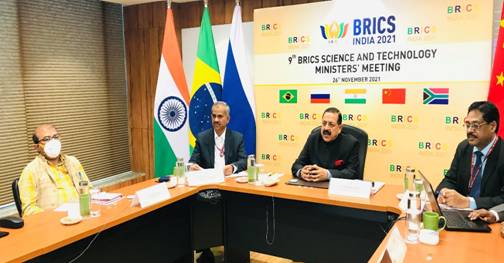 Dr Jitendra Singh reiterated that the Indian Prime Minister has strong commitment to the strengthening of cooperation within BRICS counties in this key sphere of STI which directly impacts the welfare and progress of all our peoples. It is, in the interest of all of us, to enhance the scale, scope and impact of BRICS collaboration, the Minister added. 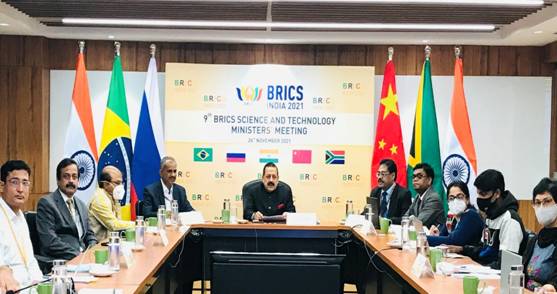 Dr Jitendra Singh said, in line with India’s overall priority, we worked for continuation of the good work from previous Chairships and also to consolidate our cooperation in Science, Technology and Innovation (STI) Track. He said, India also recognised the continued importance of cooperation in Science, Technology and Innovation (STI) to bring in technological and digital solutions for the achievement of Sustainable Development Goals (SDGs).

The Minister said that the Covid pandemic provided an opportunity to understand that global cooperation was the only way forward in alleviating such global challenges and during this period, we expanded intra-BRICS cooperation by strengthening preparedness and response to the pandemic.

During his interventions in different sessions, Dr Jitendra Singh informed that India under “Vaccine Maitri” initiative is providing COVID-19 vaccines to countries around the world. As of 22 November 2021, India had delivered around 70.70 million doses of vaccines to 95 countries and out of these, 12.7 million doses were given to 47 countries by the Government of India. The remaining 58 million were supplied by the Serum Institute of India under its commercial and COVAX obligations, he added.

Dr Jitendra Singh noted with satisfaction that BRICS scientific ministries supported several projects on COVID-19 covering the entire spectrum of research such as development of vaccine, new drugs, Genomic sequencing of SARS-CoV-2 Virus, epidemiological studies etc. He said, this will contribute to our ongoing efforts and will add to the global value chain.

Dr Jitendra Singh said, it is a matter of great pleasure for India to prepare the Innovation Cooperation Action Plan 2021-2024 with support from all BRICS countries and hoped that it will pave the way for cooperation among different actors of the innovation ecosystem. The Minister emphasized that India will actively contribute in implementation of BRICS STI Calendar of Activities 2022.

In his concluding remarks, Dr Jitendra Singh said that the 9th BRICS Science Technology Innovation Ministerial Meeting has come to a successful conclusion. All the member states have adopted the BRICS innovation Action Plan 2021-24, BRICS STI Declaration 2021 and Calendar of BRICS STI Activities 2022 which will act as a roadmap to take the cooperation forward. The Minister said, all of these new initiatives will not only benefit our citizens but will also enable BRICS as an institution to remain relevant in the coming years.