“The developing world needs not just an industrial ‘transition’, but an industrial renaissance – a flowering of industries that will create jobs and prosperity along with a clean environment”: Shri Bhupender Yadav

This high level of dialogue has contributed to the UN Conference ‘Stockholm+50’: a healthy planet for the prosperity of all –our responsibility, our opportunity’, takingplace on 2 and 3 June 2022 and set the agenda for COP27.

The event was opened by address from Union Minister of Environment, Forest and Climate Change, India, Shri Bhupender Yadav and Minister for Climate and the Environment, Sweden, Ms. Annika Strandhäll. 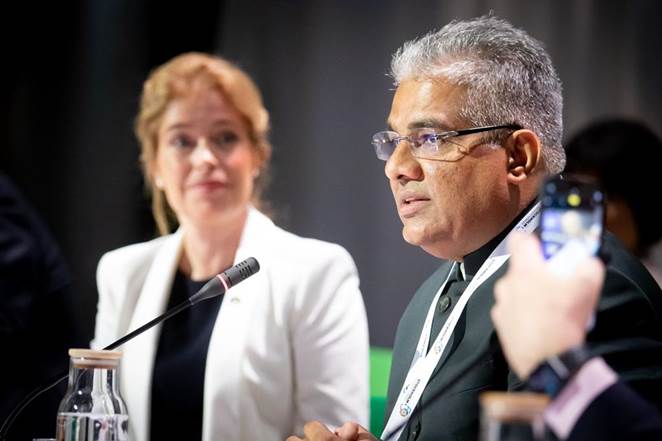 In the opening address the Union Minister congratulated the world for the upcoming 50th anniversary of United Nations Conference on the Human Environment that took place in 1972 and put environmental issues at the forefront of the international concerns. He emphasized that it is the time to celebrate 50 years of collaborative action, at the same time to introspect on what has been achieved and what more is yet to be done. “The developing world needs not just an industrial ‘transition’, but an industrial renaissance – a flowering of industries that will create jobs and prosperity along with a clean environment. The developed nations, with their historical experiences, must take lead in the global transition towards net-zero & low carbon industry.”, the minister stated. Japan and South Africa, the latest members of the initiative were welcomed. This extends the total membership of LeadIT to 37 including countries and companies together. The minister also updated the audience about the progress made under the initiative that includes the sectoral road mapping, workshops and industrial field visits to facilitate knowledge sharing and combined efforts.

During the event, India chaired the roundtable dialogues on Priorities for implementation 2022-23. The need for speed and scale in climate action was echoed by all the speakers. The countries and companies shared their initiatives, success stories and plans for future. Some very specific and valuable insights were shared by the participants. It was felt that the domestic actions if implemented and communicated well can be valuable inspiration at the international level. The efforts and exchanges through such platforms have the potential to lead the world in right direction. The commitments and pledges now must translate into action in mitigation and adaptation that rides on climate finance and technology transfer.