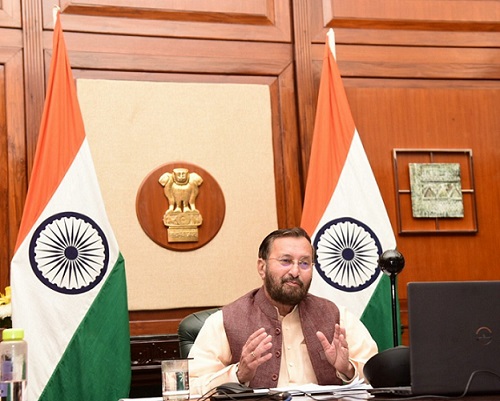 Delhi, Feb 24
Representing India at the United Nations Security Council Open Debate on “Addressing climate-related risks to international peace and security”, Union Environment Minister, Prakash Javadekar, stressed that the idea of climate action should not be to move the climate ambition goal post to 2050 and it is important for countries to fulfill their pre-2020 commitments.

Javadekar said that the United Nations Framework Convention on Climate Change (UNFCCC) and the Paris Agreement negotiated under the Framework are the central mechanisms for climate action in a nationally determined manner based on certain fundamental agreed principles, the foremost amongst which is “Common but Differentiated Responsibility and Respective Capabilities”

Citing the 2019 IPCC Special Report “Climate Change and Land” which says that extreme weather and climate or slow-onset events may lead to increased displacement, disrupted food chains, threatened livelihoods, and could contribute to exacerbated stresses for conflict, Javadekar put forward the point that even the best science available claims that Climate Change only exacerbates conflict and is not a reason for conflict and does not threaten peace and security and therefore it is important, said the Minister, to ensure that no parallel tracks for climate negotiations are created brushing aside the fundamentally agreed principles.

“While climate change does not directly or inherently cause violent conflict, its interaction with other social, political and economic factors can, nonetheless, exacerbate drivers of conflict and fragility and have negative impacts on peace, stability and security;and therefore it is for precisely this reason that developing country’s’ Nationally Determined Contributions under the Paris Agreement included information on adaptation activities, and the need for finance, technology development and transfer, capacity building, and transparency.”, said the Union Environment Minister.

Javadekar again reiterated that the commitment by developed countries to jointly mobilize $100 billion per year by 2020 in support of climate action in developing countries has not been realized and also stated that there is an urgent need to promote and support the meaningful participation of women and marginalized groups in national-level climate change policy and planning processes.

On India’s Climate Actions Javadekar stated that India is the only country on track among the G20 nations to meet its climate change mitigation commitments. We are not only meeting our Paris Agreement targets but will also exceed them. The Minister highlighted the International Solar Alliance (ISA) and the Coalition for Disaster Resilience Infrastructure (CDRI), the two initiatives by India that have been launched to addressing challenges of climate change and adaptation.

Commenting on post COVID-19 recovery, Javadekar highlighted that India believes that there is a significant opportunity for countries to integrate low-carbon development in their COVID-19 rescue and recovery measures and long-term mitigation strategies that are scheduled to be announced for the reconvened 26th session of the Conference of the Parties (COP 26) in 2021.

The United Kingdom is holding the Presidency of the UNSC for the month of February 2021 and one of their Presidency events is organizing the United Nations Security Council Open Debate on “Addressing climate-related risks to international peace and security”.