On the concluding day (December 17, 2021) of his visit to Bangladesh, the President of India, Shri Ram Nath Kovind, attended the Indian community and Friends of India reception in Dhaka, hosted by Shri Vikram K Doraiswami, High Commissioner of India to Bangladesh.

Addressing the gathering, the President said that just before this meeting, he had the privilege of inaugurating the renovated historic Ramna Kaali temple in Dhaka. He noted that the governments and people of Bangladesh and India helped in restoring the temple which was demolished by Pakistani forces during the war of liberation. A large number of people were killed by the occupation forces. He said that this temple is a symbol of the spiritual and cultural bonding among the people of India and Bangladesh. 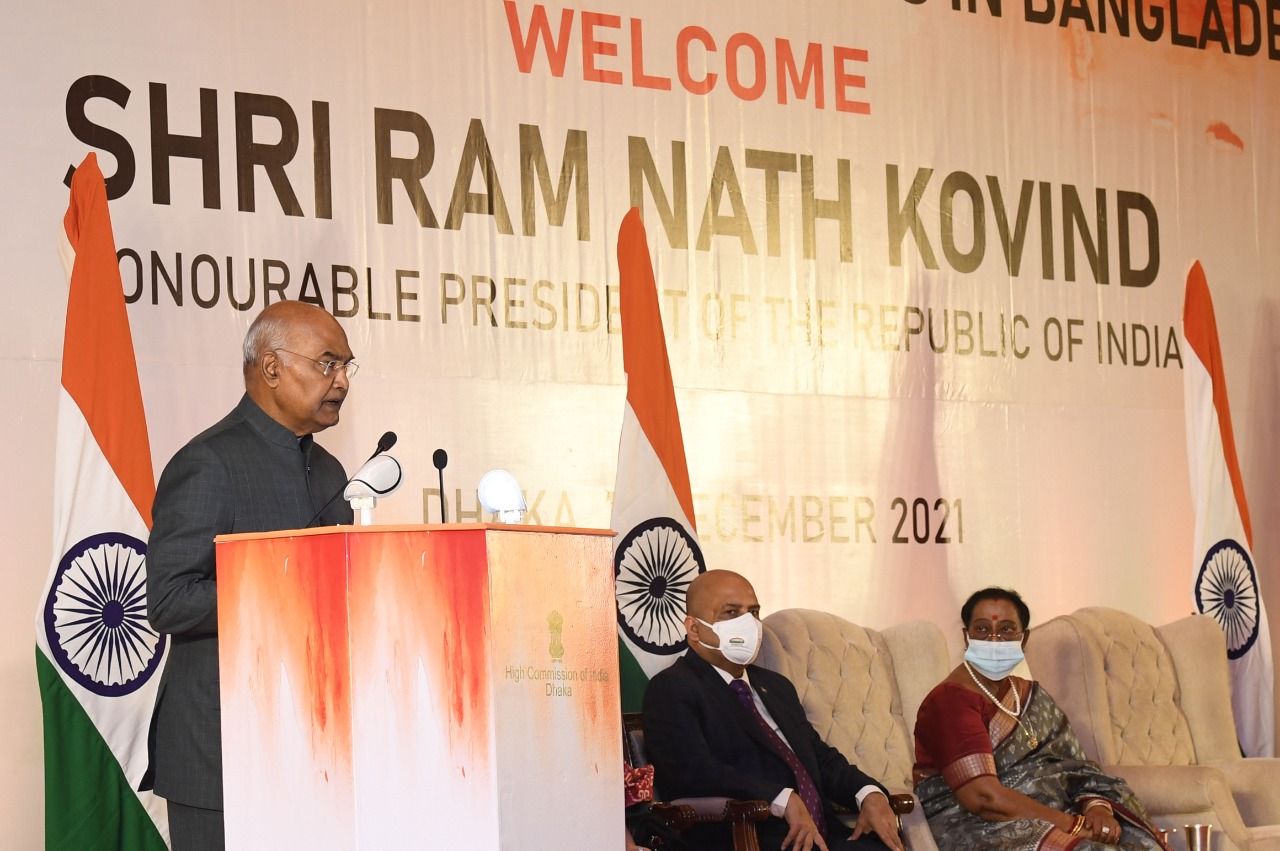 The President said that Bangladesh has a special place in the heart of Indians. Ours is a uniquely close relationship based on age-old ties of kinship, shared language and culture. Our ties have been nurtured by the sagacious leadership of the two countries. 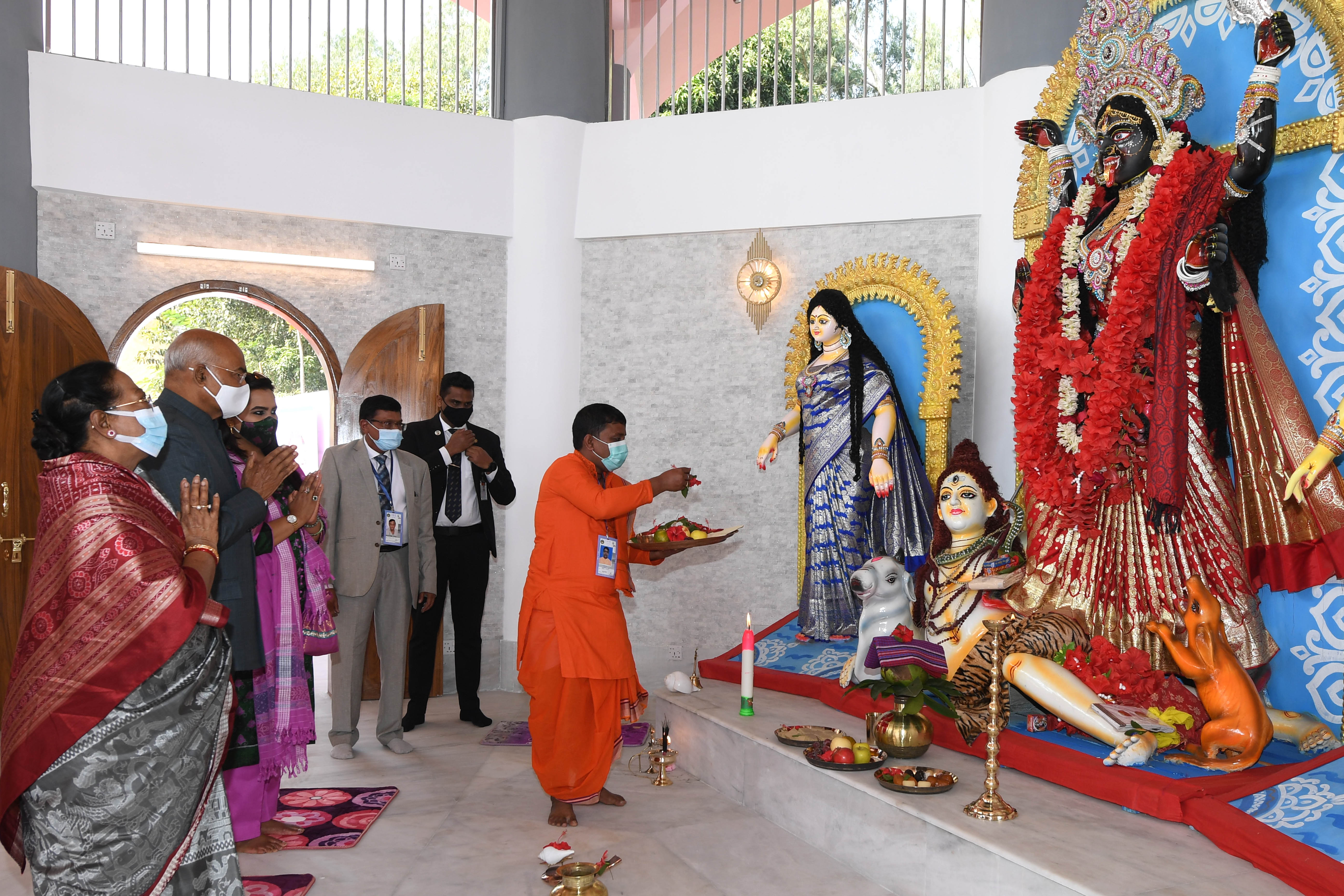 The President said that maintaining Bangladesh’s foundational values of a progressive, inclusive, democratic and harmonious society has been one of the major contributions of Prime Minister Sheikh Hasina.    He assured that India would stand in support of a Bangladesh that embodies the values that emerge from the Liberation Movement of this country. The President was happy to note that the leadership in both countries is cognizant that our growth trajectories are interlinked and that sharing of resources and experiences is the mantra for sustainable development. He was also happy to note that our two sides have made strong commitments to make our growth inclusive, sustainable and environment-friendly. He said that he sees huge potential in strengthening the cooperation further in the areas of green energy and clean technology.

The President said that as a country that also shares land borders with Bhutan and Nepal, India is conscious of the fact that a well-connected and better integrated sub region is important for achieving a better standard of living for our people, and meeting their growth and developmental aspirations. In this spirit, India remains committed to assisting Bangladesh in its journey towards a strong economy, partnering with Bangladesh as it proceed to greater prosperity. He also urged business communities on both sides to seize this opportunity to enhance trade and economic linkages to new heights especially between Bangladesh and North Eastern Region of India.

Appreciating the Indian community in Bangladesh, the President said that they have made a mark in various sectors of importance in Bangladesh. While they have contributed to the economic and social development of Bangladesh, they have also cemented India-Bangladesh long-standing, close bilateral relations. He said that Indian community is making India proud by bringing prosperity to our region. While doing so, they have also followed the values and traditions of our country, which are also part of our shared heritage with Bangladesh.

The President said that the safety, security, welfare, and well-being of Indian citizens in all parts of the world, is a priority for our Government. In every corner of the world, over the last one and a half years, the Government made special efforts to enable our citizens to return home during the worst phase of the Covid-19 pandemic. He said that government would continue to take all necessary steps to strengthen our links with our citizens abroad, as well as with our diaspora. He was happy to note that the Indian High Commission in Dhaka was at the forefront of our ‘Vande Bharat Mission’ and other welfare activities for Indian citizens in distress.

The President said that in this unique year, when we are celebrating the Golden Jubilee of the Liberation War, the birth centenary of Bangabandhu and the 50th anniversary of our friendship as well as the 75th anniversary of India’s independence, we should rededicate ourselves towards fulfilling the dreams of the founding fathers of our nations. He expressed confidence that the bond forged by blood and sacrifice in 1971 would continue to bind our nations together in future.