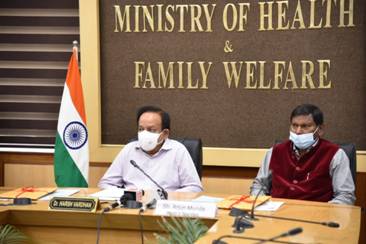 A Guidance Note on Joint Action Plan for Tuberculosis (TB) Elimination, a Special Edition of Tribal Ministry’s Publication ‘ALEKH’ on TB, and a document on Tribal Tuberculosis (TB) Initiative was also released at the event.

The Union Health Minister noted the topical need to organize the event. He highlighted that India witnessed over 18.04 lakh TB notifications, notwithstanding the difficulties presented because of the COVID-19 pandemic and its related regulation/preventive strategies.

“In spite of all the unforeseen challenges of COVID 19, the Government of India was able to convert all those into opportunities for TB Elimination by introducing bidirectional screening for COVID-19 and TB, strengthening diagnostic networks and combining TB screening in COVID surveillance activities’ he pointed out. Health being a holistic subject influenced by all aspects of life, the necessity to have a multisectoral collaboration with various Ministries and Departments to reach out to the most vulnerable population categories was underscored to achieve the elimination target by 2025.

Dr Harsh Vardhan reiterated that the UT of Lakshadweep and district of Badgam in Jammu & Kashmir have been declared TB Free on World TB Day this year while several other States and Districts across the country have been awarded for their progress made towards achieving the SDGs related to TB. He added that, “This Government accords top priority to ensuring Universal Access to free treatment and care for TB across the country. In India, we have over 10 Cr tribal population living with a huge diversity in their population dynamics. Through constant efforts, our government is able to see developments in their health indicators and overall wellbeing. The government has already increased the Budget allocation for TB in India a four-fold in the last 5 years. High quality drugs, diagnostics, digital initiatives, innovative private sector interventions and community engagement intervention, are all aligned to rapidly decline TB incidence and mortality in the country.”

The Ministers were apprised that over 104 million tribal population lives in India, across 705 tribes, accounting for 8.6 % of the country’s population. 177 tribal districts were identified as high priority districts wherephysical remoteness, malnutrition, poor living conditions and lack of awareness contribute to the vulnerability of the tribal population to TB. Initially, the activities of the joint plan will be focusing on 161 districts across 18 identified States. They would involve deploying improved vulnerability mapping techniques, organization of sensitization and capacity building workshops for volunteers, periodic TB active case finding drives, provision of TB Preventive Therapy (IPT) to identified vulnerable population and develop long term mechanisms for vulnerability reduction.

The Union Health Minister mentioned that the linking of NIKSHAY Portal of MoHFW and Swasthya Portal of the M/o Tribal Affairs will help boost data compilation on TB and pave way for efficient and convergent actions. He said,“India will be the textbook guidance to the world in TB elimination, if we could achieve this by 2025, even before the global SDG target of 2030.”

Ashwini Kumar Choubey spoke on the all-round initiatives undertaken by the government to ensure Health for all and thanked partner organizations like USAID, BMGF and Piramal Foundation for helping TB Care reach the last person in the remotest parts of the country.