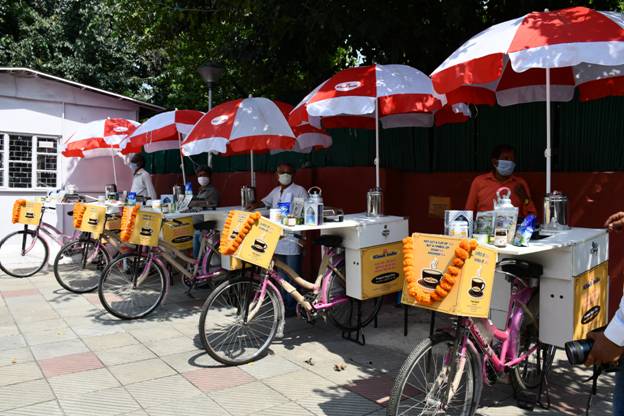 From Arunachal Pradesh on the North Eastern Frontier to Bikaner on the Western Border and from Chandigarh and New Delhi in the North to Madurai and Coimbatore down South, KVIC organized 14 programs to expand the ambit of its welfare projects to create local employment.

Minister of State for MSME, Shri Pratap Chandra Sarangi inaugurated a SFURTI Cluster of 500 artisans for making hand-knotted carpets in Prayagraj in Uttar Pradesh. Shri Sarangi lauded the initiatives of KVIC for empowering artisans and said this would help realize the dream of resurgent India. He said Khadi is playing a big role in making India “Aatmanirbhar”.

He distributed electric potter wheels to 300 Kumhar families under Kumhar Sashaktikaran Yojana and 200 bee boxes to 20 farmers families under Honey Mission. The KVIC Chairman also distributed 6 hand-operated Agarbatti making machines at Sewapuri Block in Varanasi under the Khadi Agarbatti Aatmanirbhar Mission while also launching the plantation of 100 saplings of Bambusa Tulda, a bamboo species used for making Agarbatti sticks. This will lead to local availability of raw material for Agarbatti. Notably, Sewapuri has been identified as one of the “Inspirational Districts” by Niti Aayog and several projects have already been launched at Sewpuri to provide employment to migrant workers.

KVIC Chairman said sustainable development though local employment generation has been the key focus of KVIC which is aligned with the Prime Minister’s commitment of “Job to Every Hand” (Har Hath Me Kaam). “It is the inspiration and appeal of the Hon’ble Prime Minister that has taken Khadi to a new height. We are hopeful that he will continue to lead Khadi as its biggest brand ambassador,” Saxena said.

Postponement of all offline examinations scheduled in May