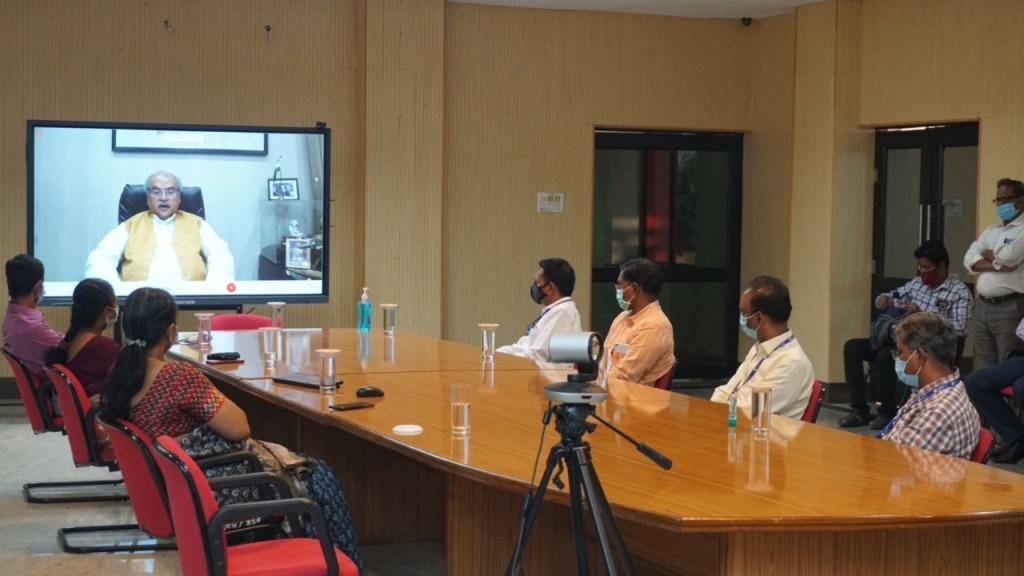 Prosperity of Agriculture and Farmers must for Aatma Nirbhar Bharat: Narendra Singh Tomar

Inaugurating the student’s residential complex and pilot food processing plants in IIFPT, he said that Central government, under the dynamic leadership of the Prime Minister Narendra Modi, has identified food processing as a priority sector for the Government and as one of the focus sectors in the Aatma Nirbhar Bharat initiative.

He added that under the far-sighted vision of the Prime Minister, Ministry of Food Processing Industries is focussing on boosting the food processing industry so that the agricultural sector attains an exponential growth and majorly contribute towards doubling the farmer’s income.

Tomar urged all stakeholders to work together to contribute to the economy, the infrastructure, the system, the demography, and the demand.

Congratulating the IIFPT, Tomar said that the institute commenced as a paddy quality testing laboratory in 1967, and has evolved across years. He added that recently, this Institution was renamed as the Indian Institute of Food Processing Technology to signify its upgradation and broadening of scope and services to all areas of food processing, including milk, meat, fish and poultry. He further said that research at IIFPT is not confined to the labs but has widened its horizons to be of use to the farmers and the society at large.

Tomar appreciated the institute for expansion plan and said that this will pave the way for creation of new state-of-the-art facilities for research and development, capacity building, consultancy and education purpose.

Narendra Singh Tomar said that Government has identified certain key areas for improvement, which include the gaps in supply chain infrastructure, inadequate link between production and processing, seasonality of operations and low capacity utilization, inadequate focus on quality and safety standards, lack of product development and innovation, and, supply chain institutional gaps. He shared that to address these concerns, in the recent past, several new schemes have been launched, aiming to take the benefits to every single Indian. He further informed that under Institutions scheme, the Indian Institute of Food Processing Technology has rendered significant contributions to the country.

Speaking about huge potential of food processing sector, Shri Tomar mentioned that with rich resources for agricultural production, India stands amongst the global leaders in the production of several food commodities. He further said that the gross value added by agriculture and allied sectors was estimated at Rs. 19.48 lakh crore in the FY 2020, with a 4% growth rate. He highlighted that the Indian food industry is all-set for a massive growth, with expanding fronts in the global food trade, strengthened by the immense potential for value addition. He added that food processing accounts for 32% of the country’s total food market, making it one of the largest industries in the country, ranked 5th in terms of production, consumption, export and expected growth. However, the estimated percentage wastage in most durables ranges between from 3-9% and 5-16% for horticultural crops, and between 2.5 and 10.52% for the fish, meat, and poultry.

Rameswar Teli, Minister of State for Food Processing Industries congratulated the institute for being ranked as 74th among all engineering colleges in India in the National Institutional Ranking Framework (NIRF) rankings 2020. He appreciated the institute for achievements on women empowerment and social responsibility apart from being placed in the rank band 6 – 25 among all Government and Government-aided institutions in the country in the ATAL Innovation rankings 2020.

Pushpa Subrahmanyam, Secretary, MoFPI said that this expansion plan of IFPT will facilitate the stakeholders. She added that 100 percent placement in the institute is a matter of great pride. Dr. C. Anandharamakrishnan, Director, IIFPT also addressed the ceremony.