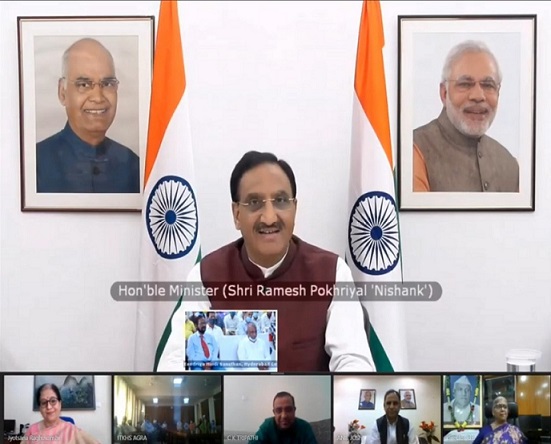 We are all realizing the dream of Gandhi in which we have to further empower the 22 languages of the country which are included in the 8th schedule of the Constitution and the important responsibility of connecting them is on Hindi. This will probably be a language with more than 9 lakh words and this power is definitely coming from its relationship with these 22 languages of the country, Shri Pokhriyal said.

Shri Pokhriyal said that it is a matter of pride that we all have gathered in times of crisis for a good cause. We have all gathered for the inauguration of a building that is constantly striving to teach Hindi. Thanking the Telangana government, he said that land has been provided to the institution. In the new education policy, we have come up with education in mother tongue. Language is not the word, but the spirit. In language, there is tradition, culture, life and value, he added.

The Hyderabad Centre building has been inaugurated on the land of Padma Bhushan Shri Moturi Satyanarayan ji, who was an ardent follower of Mahatma Gandhi, he said. Mahatma Gandhi said that all our languages are same and we have to empower all of them including Hindi that connects all languages.

Shri Pokhriyal highlighted that many countries have provided education in mother tongue. Examples of countries like Germany, France, Japan, Israel etc. are in front of us. All these countries have made a lot of progress in the field of research and technology by studying in the mother tongue. We also have to know foreign languages, but should not leave our roots. We are trying to make Indian Language University, so that people from different regions can learn the languages ​​of different states. It is very important that the people of the North learn the languages ​​of the South and the people of the South know the languages ​​of the North. This country will be one only if we are familiar with each other’s culture, tradition and food.

He appealed the states to implement the system of education in the mother tongue. The new education policy will act as a cornerstone in developing Indian languages. The Central Hindi Institute can have a very big role in this regard. The objectives for which the institute has been set up should fulfil those objectives. About 14 thousand students / teachers have received training from Hyderabad center. They are all Hindi ambassadors. I believe that people will get direction in the near future through the Central Institute of Hindi.

The program was chaired by Shri C.H. Malla Reddy, Labor, Employment Women and Child Development Minister, Telangana Government. In his presidential address, Mr. Reddy said that I was also present on the occasion of the foundation stone laying ceremony of the Hyderabad Center of the Central Hindi Institute. The then Honourable Minister of State for Human Resource Development, Mr. Satpal Singh was also present on the occasion of Bhoomi Pujan. Today I am present at the inauguration of this building, it is a matter of happiness. I request the Telangana government to provide more land to the institute, so that Hindi lovers will have a lot more facilities in future.

While delivering vote of thanks, Shri Anil Kumar Sharma ‘ Joshi ‘, Vice-Chairman, Central Hindi Shikshan Mandal, Agra said that the new building has been inaugurated in Telugu Pradesh, the birthplace of the founder of the Central Institute of Hindi, by the Education Minister, who has brought the New Education policy primarily centred on the languages. This is not just the inauguration of a building. This is an important milestone in the efforts to uplift the Hindi and Indian languages proposed in this education policy. The building is the manifestation of the efforts of the institution’s founder late Moturi Satyanarayana.

Shri Anil expressed his gratitude to the Minister of Education who visioned an education policy that would lead the future of crores of youth of this country to reach their goals. As the chairman of the Kendriya Hindi Shikshan Mandal, the minister has hundreds of dreams for Hindi and Indian languages ​​in his mind and heart. His active guidance is the greatest strength of the Central Hindi Institute. Being a poet, writer, litterateur, he is deeply aware of the challenges facing Hindi and Indian languages. The Central Hindi Institute is endeavoring to prepare online courses for Hindi teaching-training in the present session. This effort of the institute will definitely be beneficial for the worldwide spread of Hindi.

The technical coordination was conducted by Shri Anupam Shrivastava and the anchoring was done by Dr. Jyotsna Raghuvanshi at Headquarters, Agra. A multimedia presentation of the Hyderabad center was presented on the occasion in which the features of the newly constructed building of the Hyderabad center were introduced. The Regional Center Hyderabad carried out its activities since 1976 on a rented building. The newly built four-storeyed building with ground floor on the plot received from the Telangana government has been constructed through the Central Public Works Department, Hyderabad at a cost of about Rs 5.67 crore in 1000 square yards.