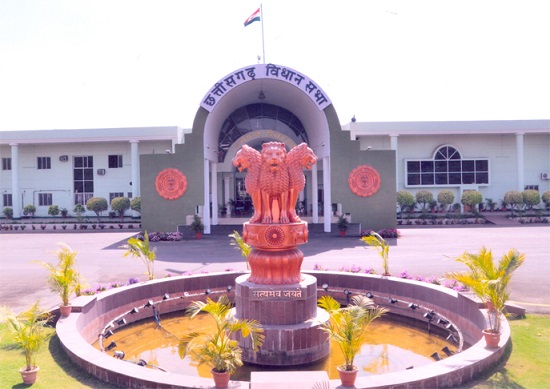 Better law and order in the state has boosted people’s faith in the system, Chhattisgarh’s policing is the second best in the country

Chhattisgarh Legislative Assembly passed vote of thanks on the Governor’s address. Earlier, responding to the discussion held in the House on Feb 26, Chief Minister Bhupesh Baghel said that this country and the state belongs to ‘Annadaata’ (food providers). We will not let the farmers be deprived of their rights under any circumstances. We will not allow deceit with the food providers.

Chief Minister said that people, who were talking about paddy procurement at support price during the discussion here, have their government in Delhi. Farmers are agitating for their demand regarding procurement of crops at support price, more than 2 hundred farmers have died, but government is not paying any attention. He further said that three laws are being forced on the farmers despite their disapproval. He said that we have sincerely taken care of the interests of farmers in Chhattisgarh.

Chief Minister Bhupesh Baghel said that I frequently write letters to Central Government regarding the interests of Chhattisgarh, commenting about which the opposition members today referred to me as a journalist. But this would not stop me. I would continue to write letters to  for the rights, interests and welfare of tribals, youth, farmers, scheduled castes, tribes and the entire Chhattisgarh state. We have created 263 new procurement centers to make the process more convenient for farmers. Paddy procurement was done efficiently and systematically in the 2300 paddy procurement centers of the state, despite the shortage of gunny bags.

Chief Minister said that some opposition members are raising questions as to why the state government is selling the surplus paddy. I want to say that if Centre allows the contribution of 6 million metric tons in the central pool, we will not have to sell paddy or rice outside. He said that we procure paddy for the central government. There was a time when there was shortage of food grains in the country, and then took place the Green Revolution, and our farmers accepted that challenge. The country has become self-supporting and today, when we have surplus food grains, the Centre is unable to make arrangements for its disposal. He said that our government has increased the wage rate for tendupatta collection from Rs 2500 to Rs 4000 per standard bag, and also the number of 7 minor forest produce procured at support price has been increased to 52. Besides, we are also doing value addition to minor forest produce. We have resolved the pending cases of Forest Land Right certificates. Chhattisgarh is the first state in the country to distribute forestland right certificates to the forest dwellers. We have given 9 lakh 3 thousand 520 acres in 4 lakh 33 thousand individual cases and 37 lakh 870 acres in 41 thousand 16 community cases, thus totaling 46 lakh 4 thousand 399 acres of forest land.

Chief Minister said that we implemented the new industrial policy in year 2019, as a result 1249 industries were established in the state. There was capital investment of Rs 16 thousand 986 crores in these industries and 22 thousand people got employment. Similarly, 104 MoUs were signed for mega industrial projects, which would lead to a capital investment of Rs 42 thousand 417 crore. He said that we had to go nowhere to attract investment. We believed in the industrialists of the state. Chief Minister said that we have set the goal to establish 200 food parks. 111 locations have been already identified for food parks.

Responding to the irrigation-related questions of the opposition, Chief Minister said that Arpa-Bhainsajhar could have been a major project, but it was made mediocre. In the last two years, due to better management of water resources in the state, actual irrigation has increased from 9 lakh 68 thousand hectare to 13 lakh hectare, which is a record in itself. He said that the previous government spent Rs 18 thousand 225 crore to increase irrigation capacity during its tenure of 15 years, but the actual irrigation capacity improved by only 16 thousand hectares. Speaking about the law and order of the state, Bhupesh Baghel said that we have been successful in establishing better law and order in the state. Naxalite activities in the state have significantly reduced. Schools which were closed for 13 years have been reopened. Several achievements have been made in various sectors including health, education, nutrition, malaria eradication. People have gained confidence in the governance.

There is law and order in the state. In India Justice Report 2020, released by Tata Trusts, Chhattisgarh’s policing has been ranked second in the country.

He said that in our tenure, Central Government owes us Rs 14 thousand 73 crore  as Chhattisgarh’s share in central taxes. From year 2004 to present, Centre owes total of Rs 15 thousand 154  to Chhattisgarh.

Bhupesh Baghel said that Chhattisgarh has right to its shares in the central taxes.

Chief Minister said that education system in Chhattisgarh during corona crisis was praised by both NITI Ayog and Prime Minister. 52 English Medium Schools have been opened on the name of Swami Atmanand to prepare the students in the state for all kinds of competitive exams.

Chief Minister said that during the tenure of the old government, the sand mines were operated by the Panchayats. Numerous complaints were received back then. Today we have made arrangements to operate these mines through tenders. Revenue of Rs 25 crores have been collected only from the tender. 25 percent of the income generated from the operation of mines will be made available to the panchayats. Chief Minister said that we have acquired Chandulal Chandrakar Memorial Medical College to improve health facilities and to protect the interest of students.

A resolution to disapprove the disinvestment of the Nagarnar Steel Plant has also been passed in this House. We will not let the sentiments of people in Bastar get hurt, said Mr. Baghel. He said that this plant should be operated by public sector companies like NMDC or CMDC. Unilateral disinvestment will not be allowed. Chhattisgarh Government is working dedicatedly to save this steel plant. He said that before the COVID crisis, there were only 151 ventilators in Chhattisgarh, which has now been increased to 514. Similarly, the number of ICUs has been increased from 53 to 406, the number of oxygen beds has now been increased to 1668.

Chief Minister said that Government of India should arrange for free COVID vaccination of all 135 crore people in the country, instead of focusing on only 3 crore people.. If the central government refuses to do so, then we would arrange for COVID vaccination of people in the state at our own expense, said Chief Minister. He said covaxine has been used for only one percent of people in 11 states. Chhattisgarh has decided to use this vaccine only after the third trial.