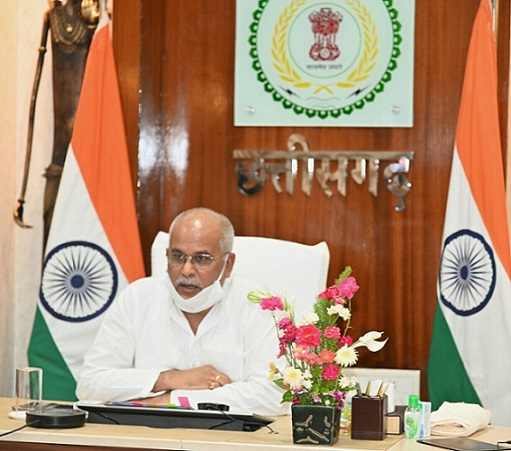 Chief Minister Bhupesh Baghel on May 1 interacted with the health workers and mitanins in rural areas of Raipur and Durg Division via video conferencing and discussed in detail about the COVID situation and treatment of the patients in their villages. Health workers, ANMs and Mitanins told Chief Minister that the symptomatic patients in their villages are recovering fast because of the timely medication.

During the video conference, Mitanin Reshma Dani of Ward-15 informed that total 15 people were infected in her ward of 114 households, and they have already recovered because of the timely medication.

She told Chief Minister about the medicines provided in COVID kits and their consumption. Mitanin Pushpa Kannauje of village Kodwa informed that currently six mitanins are working in her village. Out of the 43 COVID-infected people in her village, 32 have already been cured, while remaining 11 patients are recovering with regular medication.

Health worker Bhavani Singh informed that there were total 81 COVID patients in the 5 villages of his work area, out of which 45 patients have recovered completely while the remaining patients have been provided COVID medicine kits and they have started the medication. Health workers and mitanins also said that the patients who start their medication as soon as the symptoms appear, they recover steadily without any complication or drop in SPO2 level.

In addition to the distribution of COVID medicine kits, the patients and their families are being asked to take preventive measures such as consumption of lukewarm water, kadha and steam etc.

During the video conference, health workers and mitanins from Manpur in Rajnandgaon district, Saja in Bemetra district, Patan in Durg district, Daundilohara in Balod district, Baloda Bazar – Palari in Bhatapara district, Bagbahra in Garhband, Gariband in Mahasamund district, Abhanpur and other rural areas of Raipur district informed Chief Minister Mr. Baghel about the current status of COVID infection, progress in the treatment of infected patients and the distribution of COVID medicine kits to the symptomatic patients in their respective villages.

Chief Minister Bhupesh Baghel praised the dedication, servitude and hard work of the health workers and the mitanins in this time of crisis.

He said that along with the doctors and health team, mitanins are also discharging their duties with utmost perseverance. Because of their efforts and dutifulness, State Government could ensure timely distribution of COVID medicine kits in rural areas. These collective efforts have begun to yield positive results, as large number of patients are recovering steadily because of the timely availability of medication and guidance.

He added that the state has adequate quantity of medicines, ICU beds, oxygen beds etc. Government is taking steps to further expand these facilities. Every possible measure is being taken to prevent and control COVID infection in the state. Chief Minister expressed hope that with these consistent collective efforts of everyone, we would soon defeat the second waye of COVID infection.

All Collectors and SPs should ensure compliance of guidelines during marriage, final rites