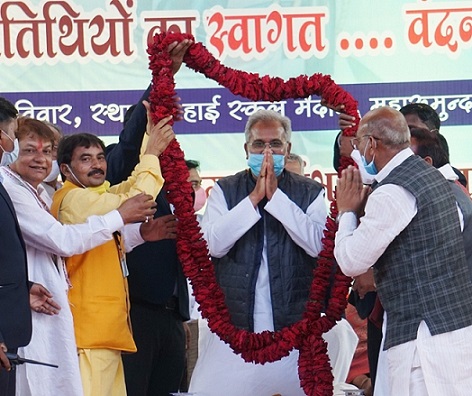 Telghani Board will be formed in Chhattisgarh. Chief Minister Bhupesh Baghel made this announcement while addressing the divisional level youth introduction conference, magazine release and felicitation ceremony of Sahu community in Mahasamund on Jan 17. With the formation of Telghani Board, people associated with this work will get a new identity and new employment opportunities will be provided.

Chief Minister Baghel said that Sahu community is a progressive community. This community has always done pioneering work in education and other social fields. Even in the Corona period, all sections of society came forward. The quality of all the communities of our state is that they adapt themselves to every situation. On this occasion, Chief Minister Baghel announced the formation of Telghani Board. Due to its formation, the people of rural areas will get employment opportunities.

Chief Minister, on the demand of the community, announced a grant of Rs 20 lakh each for the construction of social buildings in all five districts of Raipur division- Raipur, Mahasamund, Dhamtari, Gariaband, Balodabazar.

Addressing the program, Chief Minister Bhupesh Baghel said that Sahu community has always shown direction in terms of social awareness. Even in the Corona period, all communities including Sahu community came forward and performed their social responsibilities well. Everyone deserves congratulations for this.

Chief Minister Baghel inaugurated the program by lighting a lamp infront of the idol of Mother Goddess Karma of Sahu community. Chief Minister and the guests also honored the individuals who did outstanding work in social work.

Home Minister Tamradhwaj Sahu said in his presidential address that to remove the evil of any society, first of all it is necessary to improve oneself, then only the society can improve. When we improve ourselves only then we will be able to build a good society. People of our society should take special care of people from weaker sections and should work to promote them.