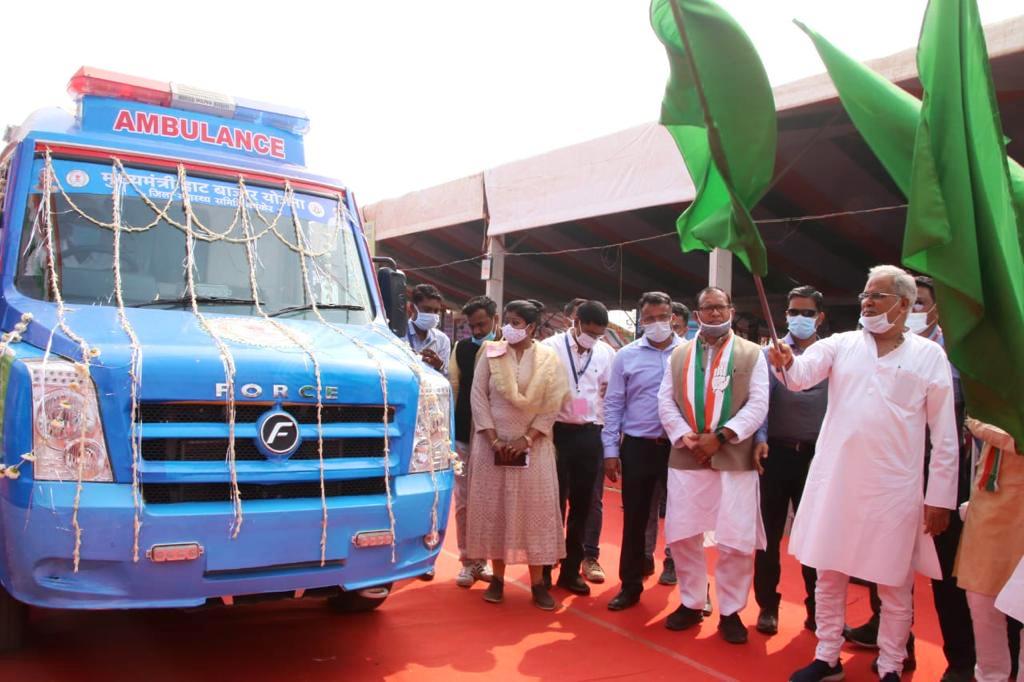 Chief Minister made several announcements for development of Kanker district, Sarona and Korar to de upgraded as Tehsils, Kodekurse and Badgaon to be made Sub-Tehsil

Sanction of Rs 5 lakh each for development of Devgudi announced

Addressing the Forest Officers Committee Conference held at Govindpur School Ground in Kanker on Jan 28, Chief Minister Bhupesh Baghel said that along with the infrastructural development, Chhattisgarh Government’s goal is to ensure development of every person in the state. Chhattisgarh Government is efficiently conducting various schemes for the welfare of various sections of the society and for development of education, employment, and nutrition.

He inaugurated and laid foundation of the development works worth Rs 342 crore and made new announcements at the general assembly held in Kanker.

He announced upgrading of Sarona and Korar as Tehsil , and Badgaon and Kodekurse as Sub-Tehsil.
Chief Minister also announced construction of many new roads, bridges and culverts. He also announced sanction of Rs 83 crore for setting up 220 KV power sub-station in Kanker district, Rs 7 crore for the construction of OPD, ICU and separate emergency ward in the district hospital, funding for establishing of Swami Atmanand Excellent English Medium School in Bhanupratappur and Antagarh and for construction of Ghotul and Devgudi in 75 villages of Kanker district.

He also released the biodiversity register in the program. He also distributed goods and financial aids to the beneficiaries of various schemes.
Chief Minister Baghel extended greetings of Chherchhera to the people and collected Rs one lakh 24 thousand and food items as Chherchera donation in the main market of Kanker, with his ministers and MLAs. He donated the Chherchhera collection to Komaldev District Hospital to arrange for food for the families of the patients.

In his address, Baghel said that the state government had started a Suposhan Abhiyan from Bastar to eradicate malnutrition from the state, which has started yeilding promising results. 67 percent children have been cured of malnutrition. State Government is dedicatedly working towards nourishment of adolescent girls and women aged 15 to 49 years, suffering from anemia. English medium schools are being opened to provide education in English to the children of remote areas. 52 schools have been opened in the state this year. Teachers are being recruited for schools and colleges to overcome the shortage. He said that 19 lakh farmers have been provided funds under Rajiv Gandhi Kisan Nyaya Yojana, during COVID crisis, for development of agriculture sector. Farmers of the entire country are desiring paddy procurement on the lines of Chhattisgarh.

Chief Minister Bhupesh Baghel inaugurated eight ambulances for Chief Minister’s Haat-Bazar Clinic Scheme at the venue of the general assembly. Two ambulances will be dispatched to Koelibeda development block and one ambulance each to the remaining development blocks of Kanker district. These ambulances have been purchased by Health Department at the cost of Rs 1 crore 54 lakh. Chief Minister also inspected the stalls set up in Govindpur School ground to inform people about various departmental schemes. Various Stalls were set up at the venue here to provide information about the schemes related to agriculture, horticulture, fisheries, silk, women and child development, social welfare, forest and energy departments.