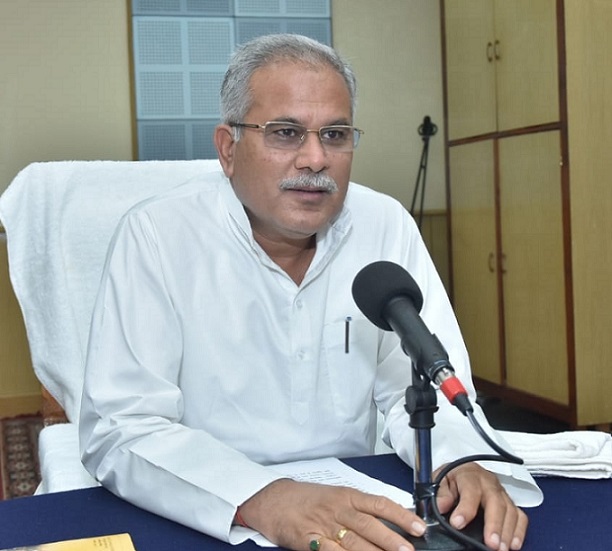 As many as 18.45 lakh farmers received the full amount of Rs 5 thousand 628 crore in four installments within a year, under Rajiv Gandhi Kisan Nyay Yojana-2020

No delay in the implementation of the scheme despite COVID crisis

In the 18th episode of monthly programme ‘Lokvaani’ aired from Akashwani, Chief Minister Bhupesh Baghel began his address with ‘Jai Johar’ and said that Chhattisgarh is a state of farmers, agriculture and farming. We believe that a state can become prosperous only when the farmers are prosperous. With this long-sighted vision of development, we launched ‘Rajiv Gandhi Kisaan Nyay Yojana’ on May 21, 2020. This scheme clearly reflects state government’s pro-farmer vision. This scheme would improve the income of farmers and empower them financially.

He said this scheme would prove to be milestone for development of farmers in Chhattisgarh.

Chief Minister Baghel said that we launched Rajiv Gandhi Kisaan Nyay Yojana on May 21, 2020, and within a year we have transferred Rs 5628 crore in the bank accounts of 18 lakh 45 thousand in four installments. Those who were objecting to the transfer of amount in first four installments, in view of COVID crisis, those people started saying that the farmers selling paddy in Kharif 2021 will not be given the benefit of Rajiv Gandhi Kisan Nyay Yojana. COVID crisis has undoubtedly affected the economic condition of the country and the state. But I had clearly said that we will not let the farmers bear the loss due to COVID crisis. In this way, we have made a provision of 5 thousand 703 crores in the budget for Rajiv Gandhi Kisan Nyay Yojana 2021 and like previous year, on 21st May i.e. Rajiv ji’s martyrdom day, the first installment of Rs 1500 crores was transferred in the account of the farmers, including 20 lakh 53 thousand 482 farmers who have sold paddy and 1.5 lakh farmers have sold maize and sugarcane. Despite the catastrophe of Corona, the implementation of the scheme was not delayed even for a day.
Chief Minister Baghel said that as a result of State Government’s farmer-friendly decision, people have begun to invest more in the agriculture sector in the state. The number of farmers in Chhattisgarh has increased by 5 lakh 50 thousand in the last two years. In many states, people are giving up agriculture to pursue other occupations, whereas in Chhattisgarh the number of farmers are continuously increasing. This means that our efforts are reaching at the doorsteps of farmers. Number of registered farmers in the state has increased from 15 lakh in year 2017-18 to 21 lakh 52 thousand in year 2020-21, and the percentage of farmers selling paddy on support price has increased from 76.47 to 95.38 per cent. With the interest and enthusiasm of farmers in the state, the target for disbursement of maximum agricultural credit has also been achieved. Paddy procurement at support price has increased from 56.88 metric tonnes to 92 lakh metric tonnes in the state.

Chief Minister Mr. Baghel said that there are many such crops grown in Chhattisgarh that are considered useful and medicinal for health, but no system has been developed to procure them at support price. Under these circumstances, farmers taking many crops apart from paddy, sugarcane and maize need cooperation from the government. Taking this need into serious consideration, we have expanded the scope of Rajiv Gandhi Kisan Nyay Yojana. We aim to provide financial aid and facility to sell crops in the market to the farmers who are taking other prescribed crops, instead of paddy. Along with paddy producing farmers, the farmers producing maize, Kodo-Kutki, soybean, tur and sugarcane, the main crops of Kharif, will be given grant-in-aid of Rs. 9 thousand per acre per year for kharif 2021. In the year 2020-21, the area from which paddy was sold by the farmer at the minimum support price, if he replaces paddy with kodo-kutki, sugarcane, tur, maize, soybean, pulses, oilseeds, aromatic paddy, other fortified paddy, banana, or if he plants papaya or does tree plantation, then he will be provided an input assistance of 10 thousand rupees per acre. Input assistance will be given for three years to the farmers doing plantation.

Chief Minister Mr. Bhupesh Baghel said that Rajiv Gandhi Kisan Nyay Yojana has been expanded with some new provisions in the larger interest of farmers. There are mainly three provisions for the amount of input assistance under ‘Rajiv Gandhi Kisan Nyay Yojana’. The first provision is that the farmers taking maize, kodo, kutki, soybean, tur, sugarcane crops along with paddy (like last year) will be provided an input assistance of Rs. 9 thousand per acre every year. Second provision is for those farmers who want to take other prescribed crops instead of paddy. They will be given grant-in-aid at the rate of Rs 10,000 per acre. Similarly, the third provision will be given to those farmers who plant trees instead of paddy, as they will also be provided aid of Rs 10 thousand per acre for three years. Under this scheme, all categories of land owners and forest lease holders will be eligible to avail the benefits. To avail the benefits of the schemes, farmers will have to register on the portal of Rajiv Gandhi Kisan Nyay Yojana and submit the application form. Farmer registration has started from June 1 and will be continued till September 30.

Chief Minister Mr. Bhupesh Baghel said that Chief Minister’s Plantation Promotion Scheme has been recently launched in Chhattisgarh to promote development of agro-forestry and to boost the income of farmers. Chhattisgarh has ideal conditions, adequate land, favorable climate and manpower for plantation of the species, for which a safe cycle can be created between the planting of trees and the cutting, so that sufficient number of trees are present at all times while villagers and farmers earn better income due to timely chopping. This step would rectify the problem of secret illegal felling of trees. We have also issued the guidelines for Chief Minister’s Plantation Promotion Scheme. All the citizens in Chhattisgarh, according to the availability of private land, and all the Gram Panchayats as well as Joint Forest Management Committees are eligible to take advantage of the scheme.
In this episode, Chief Minister Mr. Bhupesh Baghel answered the questioned asked Shri Khirodhar Ram from Block Kunkuri, Shri Surendra from Village Nagapura Block Durg, Shri Ganga Ram from Village Karwanjhar Block Dabhra Janjgir-Champa, Shri Rupesh Kumar Sahu from District Balod, Shri Khuman from Village Dundera Utai, District Durg. Singh Yadav, Shri Premraj Jain Agroforestry Activist, Ms. Rukmani Suryavanshi, District Janjgir-Champa and thanked them for the suggestions received from them.

Every possible measure is being taken to prevent COVID infection

In today’s episode of Lokvaani, Chief Minister Mr. Baghel had a discussion with people of the state about the measures and precautions being taken to control and prevent the spread of COVID infection in the state. Mr. Baghel told that the second wave of corona had come with the new variants of the virus, which multiplied rapidly. In April, the infection rate had reached 30 percent. Within a month, we succeeded in bringing down the infection rate down from 27 per cent to 2 per cent. We made a transparent system with the help of health department, district administration, private hospital operators, doctors in hospitals, health workers and aware public. The data regarding availability of beds in hospitals is displayed on the website on a real time basis. A lot of thoughtful arrangements were made to ensure availability of medicines, injections, oxygen cylinders etc. in the hospitals. Medicines were made available to patients with even the mild symptoms. In the state, the work of vaccination is also being done on priority. Due to several such efforts, the positivity rate of corona in the state has declined drastically, for this I thank the government employees as well as the common public, voluntary organizations, businessmen, industrialist community who have cooperated wholeheartedly, said Chief Minister Mr. Bhupesh Baghel.

Landmark decision taken by Government of India in Medical Education