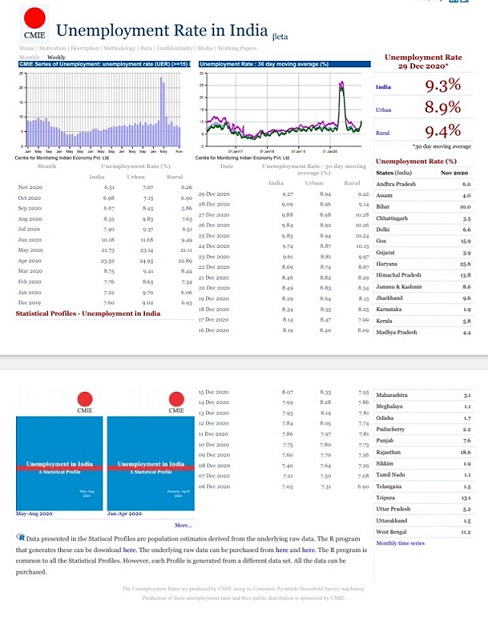 The unemployment rate in November was just 3.5 percent, while the national rate was recorded at 6.51 percent

The unemployment rate in the state in September 2018 was 22.2 percent. It continued to decline in Chhattisgarh despite the Corona crisis and lockdown.
According to the latest data released by the Center for Monitoring Indian Economy (CMI), the figures of Chhattisgarh are much less than the figures of Haryana, Himachal Pradesh, Delhi, Andhra Pradesh, Assam, Bihar, Goa, Jharkhand, Kerala, Madhya Pradesh, Punjab, Rajasthan, Tripura, Uttar Pradesh and West Bengal.

Industrial activities in the country came to a standstill during the lockdown, which had a major impact on the country’s economy. At the same time, the Bhupesh Baghel government of the state started work by preparing a strategy to strengthen the rural economy of Chhattisgarh. During lockdown, Chhattisgarh topped in providing employment to villagers under the Mahatma Gandhi National Rural Employment Guarantee Scheme(MGNREGA). In that period, special attention was given to agriculture and allied activities. The RBI also appreciated the efforts being made in Chhattisgarh. At the same time, the state government also gave relief to forest produce collectors. During the lockdown, 73 percent of the total micro-forest produce collected in the country was collected in Chhattisgarh. Along with the increase in the prices of micro-forest produce, the number of micro-forest produce purchased on support price was increased from 07 to 52. While the unemployment rate in states like Delhi, Puducherry, Rajasthan, Goa was increasing in July, the unemployment rate in Chhattisgarh came down to 9 percent from 14.4 percent in the month of June.
Industrial activities had started in Chhattisgarh in the last week of April.The state’s industrial units started production with all safety measures in place to prevent the spread of corona pandemic. Farmer-friendly schemes and public welfare decisions including Rajiv Gandhi Kisan Nyaya Yojana also created an encouraging environment. The introduction of the Godhan Nyaya Yojana and the spurt in livelihood activities in Gothan also boosted the rural economy.