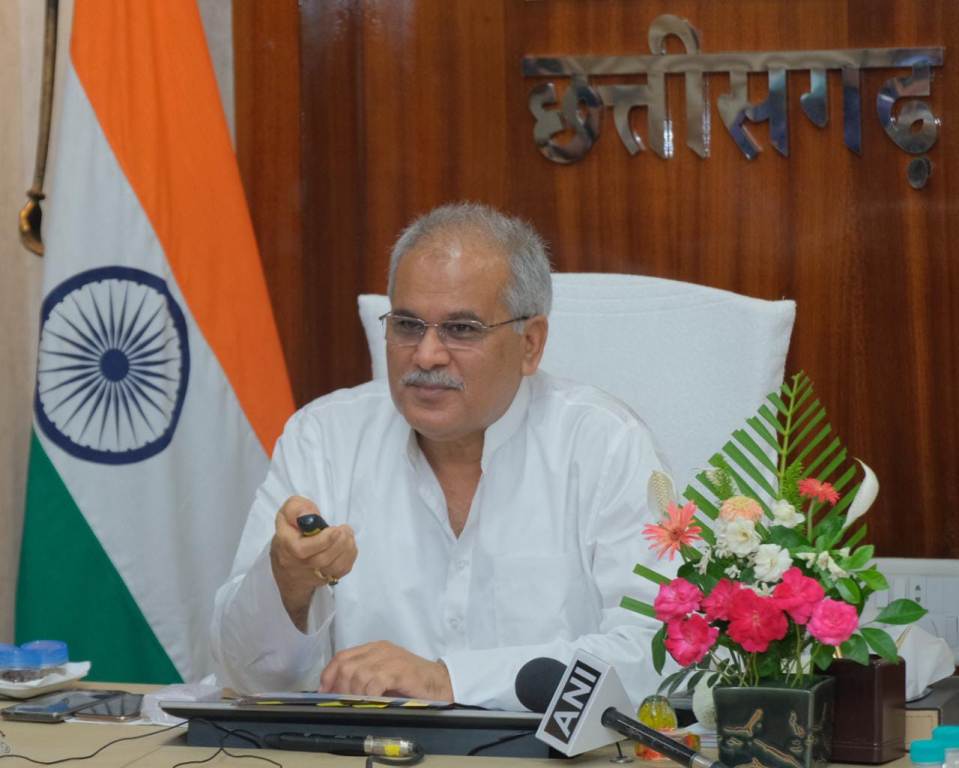 Programs organized in 12 districts so far

After the slowing down of the second wave of corona infection, development works have once again gained momentum in Chhattisgarh. Chief Minister Bhupesh Baghel is dedicating new development works in two districts of the state every day since last one week. These works are being inaugurated and Bhoomi Pujan is being performed on a large scale every day by linking the formal programs being organized in the districts through audio-video medium with the virtual programs being held at Chief Minister’s Raipur residence.

This series of development programs starting from Tuesday 8th June will be held till 21st June. By Sunday 13th June, inauguration and bhoomi pujan of development works worth Rs 3,854 crore has been done. So far, programs have been organized in 12 districts. Although the main program is yet to be held in Sukma and Bijapur districts, but in an additional virtual program for these two districts, inauguration and bhoomi pujan of works worth Rs 50 crore have been done. One of the major features of these virtual programs is that Chief Minister Mr. Baghel is directly interacting with the beneficiaries participating in the programs of the districts and taking feedback from them about the schemes of the government. In the virtual programs held at the capital Raipur, all the senior ministers and senior officers of the state are present,whereas in the programs of the districts, the ministers-in-charge, public representatives, officers of all the departments and beneficiaries of the schemes are participating.

Inauguration-Bhumi Pujan of 244 development works worth Rs.685 crore in Durg and Balod districts

On June 8, Chief Minister Shri Bhupesh Baghel, while inaugurating development and construction works of Rs.685 crore in Durg and Balod districts, said that the first and second wave of Corona pandemic, posed many difficult challenges in front of us, but our resolve to build new Chhattisgarh could not be deterred. In this program, inauguration and bhumi pujan of 244 works costing Rs.685 crore was done in Durg and Balod districts. In which 57 works costing 285.87 crores in Durg district and 187 development and construction works costing Rs 399.32 crores in Balod district are included. The works given by the Chief Minister to both the districts mainly include development of basic facilities like education, health, roads, electricity and drinking water. On this occasion, Chief Minister Bhupesh Baghel announced an amount of one crore rupees for the pipeline expansion of the water augmentation scheme of the Municipality of Balod.

Approval of Rs.6 crore for construction of a pucca road including a bridge up to village Pahanda-Limahi-Raipur road in Balodabazar district

Chief Minister Bhupesh Baghel has said that minor forest produce which was once a means of exploitation, has become the strength of the forest dwellers today, due to the schemes of the state government. Along with giving forest rights to the forest dwellers, the state government has also given rights to the villages on the resources of the forests. In the program organized on June 10, the Chief Minister gifted 1270 works costing Rs 582 crore to Gariaband and Kabirdham districts. He inaugurated and performed bhumi pujan of 516 works costing Rs. 357 crore 23 lakh for Gariaband district and 754 works costing Rs. 224 crore 75 lakh in Kabirdham district and held discussion with the beneficiaries of various schemes in both the districts.

Chief Minister Bhupesh Baghel has said that the experience and needs of common Chhattisgarhias are the basis of state government’s schemes. This is the reason why our schemes are easily reaching the common people at the grassroots level. He said that it is a matter of satisfaction that our Annadata is happy today. People are getting the benefits of the schemes and the means of employment in the villages itself. In the program of June 11, the Chief Minister inaugurated and performed Bhoomi Pujan of works worth Rs 828 crore in Rajnandgaon and Dhamtari districts. On this occasion, he alloted 192 development works worth Rs 556 crore in Rajnadgaon district and 270 new development works worth Rs 271 crore 51 lakh in Dhamtari district and held discussions with the beneficiaries of various schemes of the government and inquired about the benefits received by them.

The resolve to build a new Chhattisgarh is being fulfilled

State government committed to protect the interests of tribals

10 gram panchayats of Gangalur area to get rid of the problem of red water: installation of siltation filtration structure and solar dual pump at a cost of Rs 5 crore

Bhoomi Pujan with the approval of 104 works costing Rs 43.08 crore

In another program on June 12, Chief Minister Bhupesh Baghel announced the approval of a 30-bed hospital in Jagargunda on the demand of the villagers during a virtual program discussion with the villagers, public representatives and social heads of Bijapur and Sukma districts. Similarly, in Gangalur area of ​​Bijapur district, Chief Minister announced the installation of siltation filtration structure and solar dual pumps in 10 Gram Panchayats including Gangalur, Burji, Gongla, Pusnar, Pedia, Todka, Gampur, Kaika, Reddy and Palnar, affected by red water problem at a cost of Rs. 5 crore. With the establishment of this plant, clean drinking water will be available to about 20 thousand people of 6 thousand families of this area.