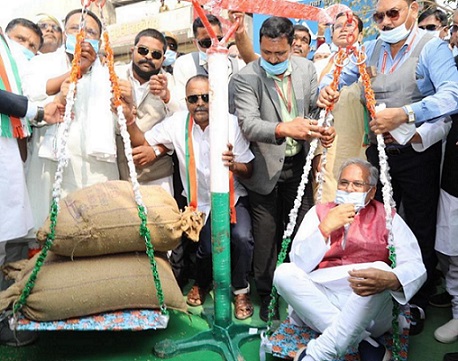 Bhupesh Baghel visited shops and homes during his Kanker tour, extended hearty wishes of Chherchhera Punni festival to the citizens

Chief Minister was weighed with paddy

On the occasion, Chief Minister Baghel extended the hearty greetings of the festival to people and said that Chherchhera Punni Tihar is celebrated on the full moon of Pausha month to celebrate the new harvest and to encourage generosity. Chief Minister said that on the occasion Chherchera Punni, group of children, youth, farmers, laborers and women go door-to-door asking for donations.

The festival promotes sense of equality, as rich and poor come together to follow the tradition of collecting paddy, money and other goods as donations from all the households, which are later used for development works in the village. Chief Minister said that despite the challenges this year, State Government has procured 89 lakh metric tonnes of paddy so far. This year, a new record of paddy procurement will be made.