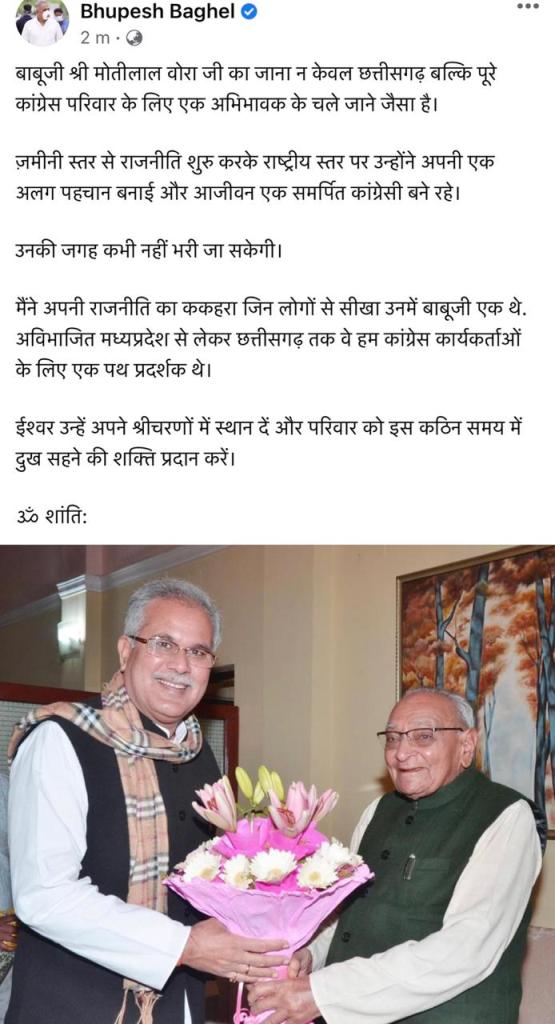 ”Babuji Motilal Vora’s demise is an irreparable loss not only for Chhattisgarh but also for entire Congress Family, we have lost a guardian, said Chief Minister Mr. Baghel

Paying a humble tribute to late Vora, Baghel said that his demise is an irreparable loss to not only Chhattisgarh but to entire Congress family. We have lost a guardian.

He started his political career from scratch and made his way to the national-level. He was a dedicated member of Congress party all his life. Chief Minister said that-“Babuji Shri Vora was one of the important people in my life, from whom I had learnt a lot about politics.

Chief Minister Baghel prayed for the departed soul to rest in peace and deeply empathized with the grief-stricken family of Vora.
Baghel said that it was yesterday, when Babu Ji’s 93rd birthday was celebrated. No one expected this tragic news today. He said that as Chief Minister of undivided Madhya Pradesh, Vora had made immense contribution to the all-round development of the then Chhattisgarh region.

Three-day State Mourning from December 21 to 23 has been declared by Chhattisgarh Government on sad demise of Motilal Vora, Ex-Chief Minister of Madhya Pradesh. In this duration of state-mourning, national flags hoisted on government buildings will remain half bent and no entertainment or cultural programme will be organized. State Government has also decided that the last rites of Shri Vora would be performed with state honour. General Administration Department has issued order in the context from Mantralaya (Mahanadi Bhavan).