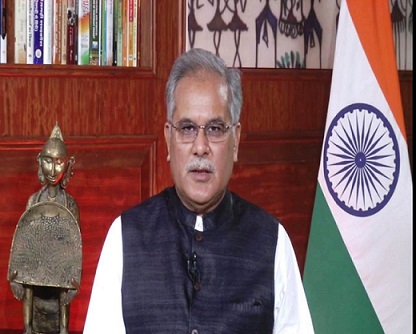 Chief Minister Bhupesh Baghel, while addressing the people of the state on April 30 in relation to Covid prevention and vaccination, said that at this time the whole world is facing the Corona pandemic. Health and medical services were never given enough importance during the 15 years of the then government, in these circumstances it was a big challenge to face a pandemic like Corona, but we have faced this challenge with full competence till now. We have done a lot of work to improve the structure and system of health services of the state, due to which the position of our state is much better than other states in the management of Corona.

Chief Minister said that last year when the first wave of Corona attacked us, we all faced it together. It was a time when we did not know much about corona, we did not have medicines to treat it, neither injections, nor vaccine had developed and the protocol of treatment was also in its primary stage. But with the cooperation of all, with the trust of all and with the contribution of all, we had conquered that difficult time.

Today, we are once again facing the second wave of Corona which is more contagious and dangerous than the first wave but we are confident that together we will face this second wave reliably while fulfilling our responsibility and we will win.

So far 7 lakh 13 thousand 706 people have been infected in Chhattisgarh, out of which 5 lakh 87 thousand 484 people have recovered. At present 1 lakh 17 thousand 910 people are active infected. The active patient ratio in the state is 16.5 percent, while the rate of recovery is 82.3 percent. But this will create a new belief in you that Chhattisgarh has left behind many developed and resource-rich states in the country in the case of Covid vaccination.

More than 55 lakh 69 thousand dose vaccines have been administered in the state and we are ahead of the big states of the country. Vaccination in our state has been 72 percent, which is the highest in the country, this figure is only inclusive of people above 45 years of age and front line workers.

Chief Minister Baghel said that we have decided that we will vaccinate people between 18 years to 44 years in the state free of cost, a comprehensive action plan and all arrangements have been made for this. We have completed all the preparations in all our districts for the vaccination campaign starting from May 1, all our immunization centers are fully ready.

He said that the Government of India has informed that it will provide one lakh three thousand forty Vaccines for the vaccination of people in the age group of 18 to 44. Since there is a shortage of Vaccine, we will start the Vaccination from the poorest person in our state who has Anodaya Card. For this, the beneficiary will have to bring his ration card and Aadhaar card. As we get the vaccine, we will progress in the direction of vaccinating all classes of people respectively.

In Chhattisgarh, we have conducted more than 71 lakh Covid tests so far. We are constantly trying to increase our testing capacity, we have started the process by approving the establishment of new RTPCR test labs. Packages have been set up for private hospitals for lab tests and concessional treatment for corona affected people, so that a person of weak economic condition can get his treatment and examination done. On the other hand, we have recruited 296 new doctors in the state.

Chief Minister Baghel said that there is not just sufficient availability of oxygen in the state but surplus oxygen is available in Chhattisgarh. We have resolved not to let this fight against Covid fall short of funds. We have made a provision of Rs 880 crore in the health budget in these two years, Rs 50 crore in SDRF this year. The people have greatly contributed in the Chief Minister’s Relief Fund, which is an indication of the people’s unwavering trust in the government. With this fund, we have so far released Rs 73 crore 53 lakh to districts for the fight against Covid, thus we have invested Rs 1003 crore 53 lakh in the health sector so far. At the same time, 53 crore 88 lakh rupees are still deposited in the Chief Minister Relief Fund, it will also be used in the battle against Covid.

He said that various institutions and people in various districts have extended their help. In addition to the funds of various departments, District Mineral Trust funds,we have also received assurances regarding assistance under CSR funds from industries . We have decided that the ration of the month of May and June will be given to the people simultaneously. It will be given completely free.

Chief Minister said that as you know, from May 1, we will administer 2 crore 60 lakh free vaccine doses to 1 crore 30 lakh people between 18 and 44 years of age. For anyone who is over 18 years of age, registration has to be done through the Cowin platform or Arogya Setu App. This registration has started on April 28. Since the vaccine manufacturer companies are providing the vaccine at higher prices to the states than the center, we will incur an expenditure of more than 800 crores for this, which we are also determined to do.

He said that we have also ordered 50 lakh doses of vaccine to start vaccination from May 1, of which 25 lakh doses have been ordered to Serum Institute and 25 lakh doses to Bharat Biotech. Even during the time of such a disaster, people are coming together with the government on their own and want to extend a helping hand to each other.

We know that the self-respect of the people of Chhattisgarh makes them all the better. Even the smallest contribution of the people is a matter of utmost respect for us, which will further strengthen the bond of our mutual brotherhood.

Chief Minister Baghel while requesting the general public has said that all of you must follow all the precautions related to Corona and avoid the crowd, follow social distancing, wear a mask, use hand wash and sanitizer. Do not be influenced by any kind of rumor or negative propaganda.

Chief Minister Bhupesh Baghel has appealed to all the citizens of Chhattisgarh to get their vaccine dose. Be safe yourself and protect others as well. Maintain hope and trust. We will all together overcome this Covid crisis very soon.