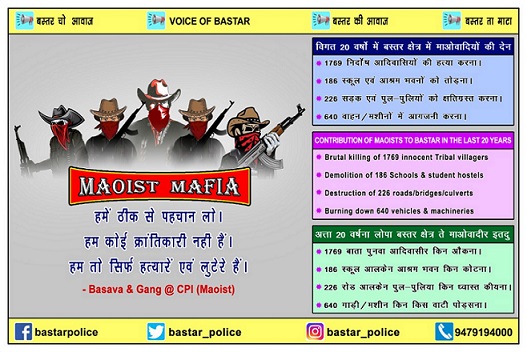 The campaign named as ‘Bastar Tha Matta’ in Gondi and ‘Bastar Cho Awaaz’ in Halbi would make the local cadres realise the anti-tribal and antidevelopment plot of senior Maoist cadres, said a senior police officer.

The officer further informed that ‘Bastar Tha Matta’ and ‘Bastar Cho Awaaz’ means the voice of Bastar and it would reflect the emotions and sentiments of the Bastar people to the outside world. The contents of the propaganda would be in Gondi, Halbi and other local tribal dialects in order to make the local population aware about the misdeeds of Naxal movement.

Bastar Police launches counter propaganda: “Through a series of posters, short films, audio clips and other popular propaganda methodologies, Bastar police would wage a high intensity campaign against the anti-tribal and anti-developmental activities of the naxals,” stated the officer, adding that addressing the challenges of left wing extremism remains top on the priority list of Bastar Police for the last two decades.
“In addition to the ongoing offensive operations against the red guerrillas, there is a strong need to expose the real and ugly face of the maoists. For the same purpose, Bastar police have launched a counter propaganda psyops against the misdeeds of maoists,” stated Bastar Range Inspector General of Police Sundarraj P.
The IG believes that this counter propaganda war would not only help the security forces to portray the maoist atrocities but also make local cadres realise how they have been misguided and misused by their senior cadres.
Over these years the local police force with the help of central paramilitary forces like Central Reserve Police Force (CRPF), Border Security Force (BSF), Indo Tibetan Border Police (ITBP) and Sashastra Seema Bal (SSB) have made much inroads into the erstwhile stronghold areas of CPI Maoists, said the officer adding that induction of well trained and highly motivated special anti-naxal task forces like DRG, STF and CoBRA has given the much required operational edge to the security forces. The popular three pronged strategy namely “Vishwas, Vikas & Suraksha” being adopted by security forces have yielded positive results in Bastar Region, added the officer.